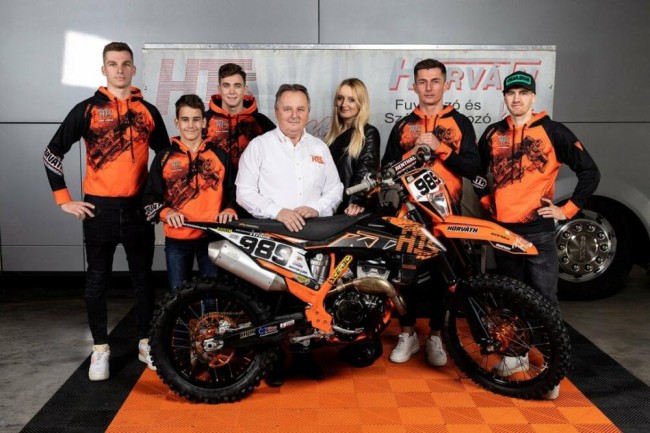 In 2023, we are starting the competition season with radical changes. A successful Austrian motorcyclist will also join us.

In 2022, we won the team championship title for the tenth time, and we were also able to enjoy some great individual successes. This year, however, an era in the life of the team ended, for next year we want to prioritize international participation, and we have restructured our team with this in mind.

Áron Katona, 12 years old, will be seen in the 85cc category of the ADAC MX Masters and the European Championship riding an 85cc KTM.

Bence Pergel, 18 years old, will compete in the ADAC MX Masters Youngster category and in the 250cc category of the European Championship riding a four-stroke 250cc KTM.

The new signing of the HTS Team for the year 2023 will be the 25-year-old Austrian Michael Sandner, this year’s Open EB bronze medalist. Michael represents the HTS team in the king category of the ADAC MX Masters and the Open category of the European Championship in the saddle of a 450cc KTM.

The +1 competitor will be the 24-year-old Mimó Varga, who will make a trip to the world of SuperEndruo during the winter (we will provide more information about this change soon). We will give Mimo the chance to join the starting four in the ADAC MX Masters series if he can successfully prepare for the challenge.

In addition to the ADAC competitions and EC rounds, the Austrian championship is also in the crosshairs of our team, but we will see for sure whether we can participate in the entire series after the announcement of the official competition calendars.

“We have been present in the domestic sports scene since 2012, during this time we managed to win everything possible in this sport. In addition to the Hungarian championship, we also participated in international competitions before, but the domestic series always had priority. In 2023, it will be different. Our international team we have put together a success-oriented plan. We have given our trust to competitors who have proven in previous years that they have something to earn beyond our borders. For the next year, we have also restructured our team support system in order to operate more efficiently. During the winter, we are working to ensure that the year ahead will bring outstanding international success for our team.” – Lajos Horváth, team owner, looked into the future.

We will inform the public about our further plans later.