Herlings on THAT win at Ironman! 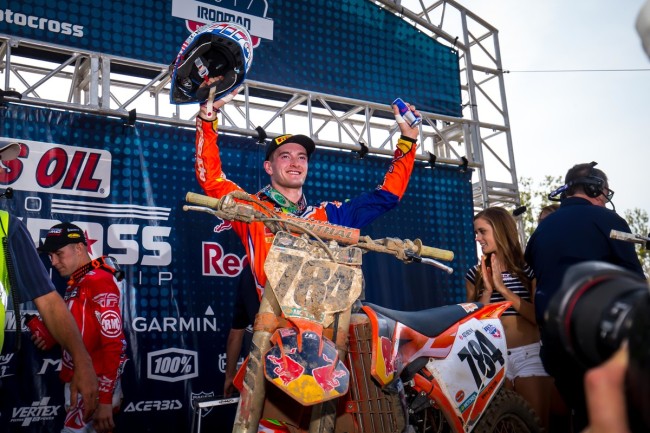 Jeffrey Herlings spoke to the press after his sensational victory at the final round of the US nationals and talked about the race, the difference in tracks and why training with Aldon Baker might not suit him for MXGP world championship.

Deciding to do the race: “I spoke to Pit Beirer and said I’m flying to Aldon Baker’s place to on Tuesday to go to Aldon Baker’s place to get used to the heat from the GP, I said, ‘what would you think about racing the race (US National)’ he said, ‘yeah, yeah let me think about it, let me make some plans and phone call because obviously the US bike is different. We came here Tuseday, wetn to ride for the first time on Wednesday, it was a completely different bike, so we thought had a couple of hours to set it up then go ride press day because it was a brand new track and we want to get used to the track at least, I was super happy with bike straight away.”

Bike changes: “You have to set your bike up different, out here the track was absolutely amazing, how they set the tracks up so good. Back home the tracks are small and narrow and pretty tough to pass, I am not saying it’s bad but in Europe if you crash like I did in the second moto off the start you are almost unable to come from last to first, it’s two different worlds, I like the American style.”

Racing in the USA full-time: “Not really this was just a one-time thing. I have a contract in Europe for three more years so I am pretty happy at home, I like it there.”

Expectations: “It’s hard to say, everything was new, that’s why I wanted to do press day. Back home we have Saturday, warm-up timed practice, qualifying heat then again on Sunday you have warm-up and then the two races, s by the time it is race time we have an hour and a half or two hours on the bike or something. Here you have ten minutes practice and then 15 or something, so it is completely different. At home everything is pretty chilled, you enter the track when the practice is already going and here it’s like a race ( the way they take off) it’s insane. It’s two different worlds.

“I didn’t know what to expect, I knew Eli would be fast, Marvin would be fast, Blake and also guys like Barcia, Bogle. I didn’t know what to expect, I’m on there track and I thought anything in the top five I would be happy with but then I went out and put a fast lap time in first practice, fastest in second practice so then I thought if we get some decent starts I can come out on top.

“First moto I got a decent start and worked my way into the lead in the first lap and had a good battle with Marv and managed to win the moto. Second moto made it a tough, they watered the first and second turn a little bit and in the second turn my front end washed away and I had to come from dead last. Obviously I was a bit luck when Marvin making a small mistake, he actually gave the win to me but it’s racing, I crashed and so did he.”

On being teammates with Musquin again: “It was pretty awesome, we were actually on the same flight out and we were like, ‘ do you remember back in 2010 this and that, remember in Europe that guy,’ So it was pretty awesome we could talk about the past, he knows how it is back home so we had a lot to talk about. I think Marv is a great athlete and a great ambassador for the sport, it was nice to battle with him and all those guys here, I have respect for everybody. It was a pleasure to come here and to go home with a 1-1 is pretty amazing.”

Passing Tomac pulling a tear-off in second moto: “When I went there it was like, he is the guy to beat, he is the guy to beat and we were fighting for tenth spot and I was like, alright, cool- let’s battle! But I know he was racing for a championship so for sure he didn’t really care if he finished first, fifth or tenth because he was riding for the championship so I totally understand. He had a little crash in the first moto when he was behind me but he will be on his A game next weekend.”

Crashing in second moto: “I just put my head down. In the first two laps I couldn’t make all the jumps, I don’t want to be disrespectful but between place 25 and 40, not a all the guys make those big jumps and I didn’t want to jump on somebody’s neck so you lose so much ground and so much time. When I got to 20th I was 15 or 20 seconds down and I still have to pass all those guys but like I said the tracks are so good, there are so many lines and you can pass anywhere.”

Riding at Baker factory: “He is pretty famous in Europe and everybody is speaking about him, he brought a lot of championships with a lot of good riders. I’m just want to learn what they are doing and how they train. But when I come here I see they train different, you can’t race the way you do here at home, the tracks don’t allow you, you don’t have as much grop or line, you can’t just open the throttle and go. And also with the weather in the winter it’s freezing, it’s cold it’s rainy, that programme it’s absolutely amazing in the US but I don’t think it works in Europe because the situation is different. We fly to the races Thursday or Friday race Saturday and Sunday then fly back Monday, here it is just one day and it is always good weather n Florida or California, it is two different worlds like I said.”

During the press conference Blake Baggett suggested he might need to go and race on some of the MXGP tracks to improve! “Evidently I need to go to Europe and do some riding because this guy took us to school,” admitted a respectful Baggett. “So I need to get my pen and paper and take notes, because he definitely served us justice today.”