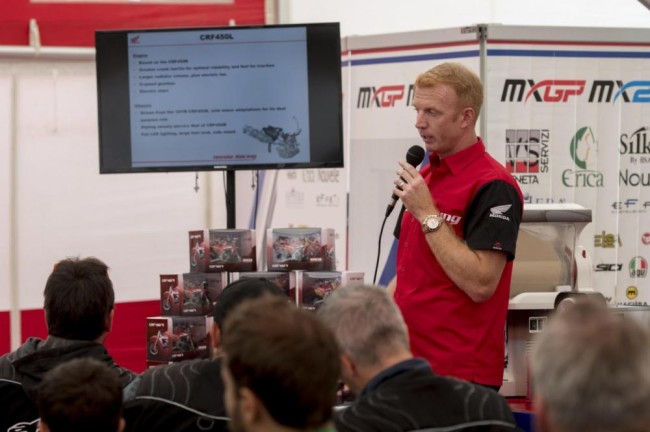 For many people who watched motocross around the turn of the millennium, Northern Ireland’s Gordon Crockard is synonymous with the Honda CR250 two stroke that he used to win races, take home British titles and challenge at the very highest levels of Grand Prix motocross during that period. A few years later and the sport transitioned through to four strokes, and while the changes weren’t easy, the Ulsterman continued to find success in the new era of racing.

Now, after a racing career that spanned over 20 years (and is still going if you count the Veteran Motocross des Nations at Farleigh Castle, UK each year), Crockard has swapped his jersey for a collared shirt and is seen on the in-field of a race track rather than behind the gate, as he performs his role as Off Road Racing Manager for Honda.

“It’s a job that I feel like I have a lot to offer because of my background as a rider, as a mechanic and as a coach. I think that I’m in a very good position to handle the racing activities” said Crockard. “I’ve had 30 years of study of motocross to build experience and knowledge”, and those three decades have seen marked change – not just for “Crock” as he is known within the sport – but for the World Championship-winning Honda CRF (formerly CR) and for motocross as a sport.

Gordon’s role was a natural progression from his previous job as Head Coach and Series Manager for the Honda 150 European Championship, which at the time changed his career path from motocross coach to one which saw him back at Grands Prix working with the Honda CRF150R and over 30 riders per season, in what was a very unique and exciting opportunity for any young motocross prospect and which has helped kickstart the careers of several leading lights in the junior MX categories.

Change has never been something that Crockard has been afraid of, especially when racing in what was one of the most tumultuous periods in motocross history at the start of the millennium, as the sport swapped from two-strokes to four strokes and experimented with a variety of different classes and race formats.

“There were a lot of changes, not only from two stroke to four strokes, but also the championships began to merge into one premier class that had a mixture of 250 two strokes and 450 four strokes. You had to be very good at accepting the change. You couldn’t be bitter and you had to learn new ways to prepare and setup and race four strokes but it wasn’t easy.” Especially as each machine had such different characteristics and rose-tinted spectacles continue to fuel debate to this very day.

“We were changing machinery from 250 two strokes, which were very thrilling, loose, ragged, always on the edge and very difficult to master riding. They were very exciting to ride and still are. We moved onto four strokes, which are a lot more controllable, have a lot more linear power, more torque, less snap and punch.” With such a change came the need to approach things differently as a rider, and also led to a proliferation of technical development, which Honda once again proved themselves very adept at. 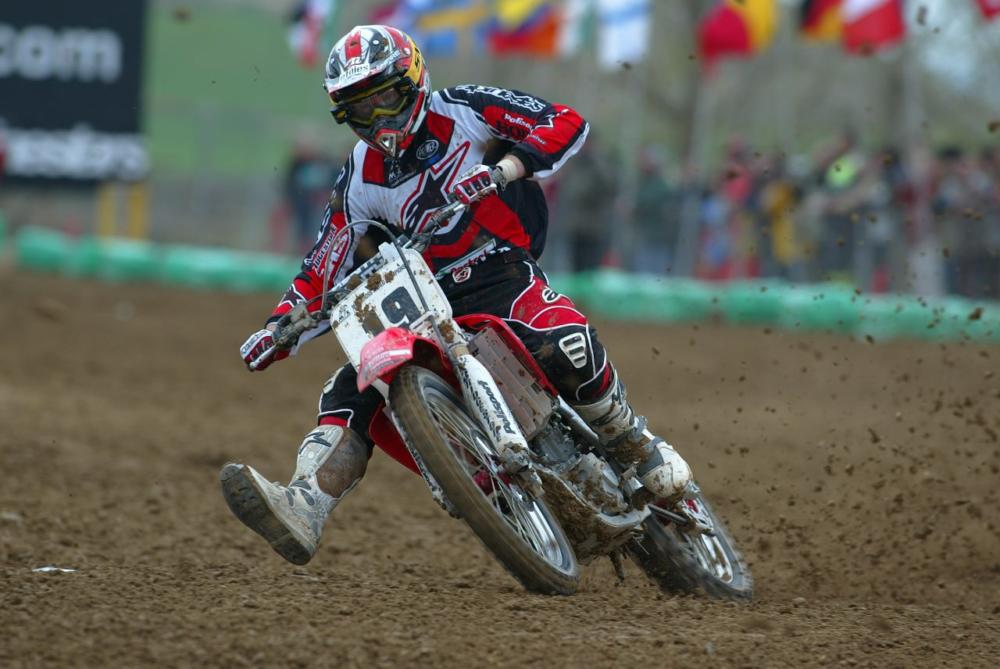 Crockard during his GP days. Pic: Shot by Bavo

While there was resistance to it at the time from the purists, very quickly four strokes were winning everything, with the Honda CRF450R leading the way. “I was very confident making the switch from two strokes to four strokes because I was on a Honda. It was the future. It was inevitable. Certainly, riding Hondas, they had developed a really pioneering bike and had done such a good job as the CRF450R was dominating in just about all of the championships that were entered in. It came on the market and straight away it was very successful.” So began the legacy of the Honda CRF, which continues to this day and has helped Tim Gajser seal his second World Championship crown.

Gordon himself picked up his third British Championship title in 2003 with Honda (after scoring back-to-back two-stroke championships), but he certainly had to push himself and change how he rode. “250 two strokes were exhausting to ride. It took a lot of energy to ride them fast and I was aware of this from the very beginning. So I developed a riding style that was as conservative as possible, with the strategy being ‘minimum input, maximum output’. All I could do when we swapped to four strokes was to try and increase my base speed as the Honda CRF allowed you to carry more speed everywhere – there was always traction. I couldn’t rely on the old strategy of the two stroke and hope competitors would get tired and I could pick them off at the end of the race.”

And with that change in style came a change in training, something with Crockard acknowledges has definitely improved since his time at the top. “I think that there is a lot more science and there is a lot more recording and measuring and studying of numbers and statistics in how people train now. I think back to when I started and it was a lot more ‘Rocky Balboa’ style where you just exhaust yourself as often as you can, as much as you can during the week.” And with all this science comes an increase in the personnel required for a top-level rider. “The riders have definitely picked up and collected more tools to use to help them. People nowadays have programmes and there are rider coaches and physical trainers, as well as physiotherapists. That wasn’t around when I started and is all indicative of how much the sport has changed.” 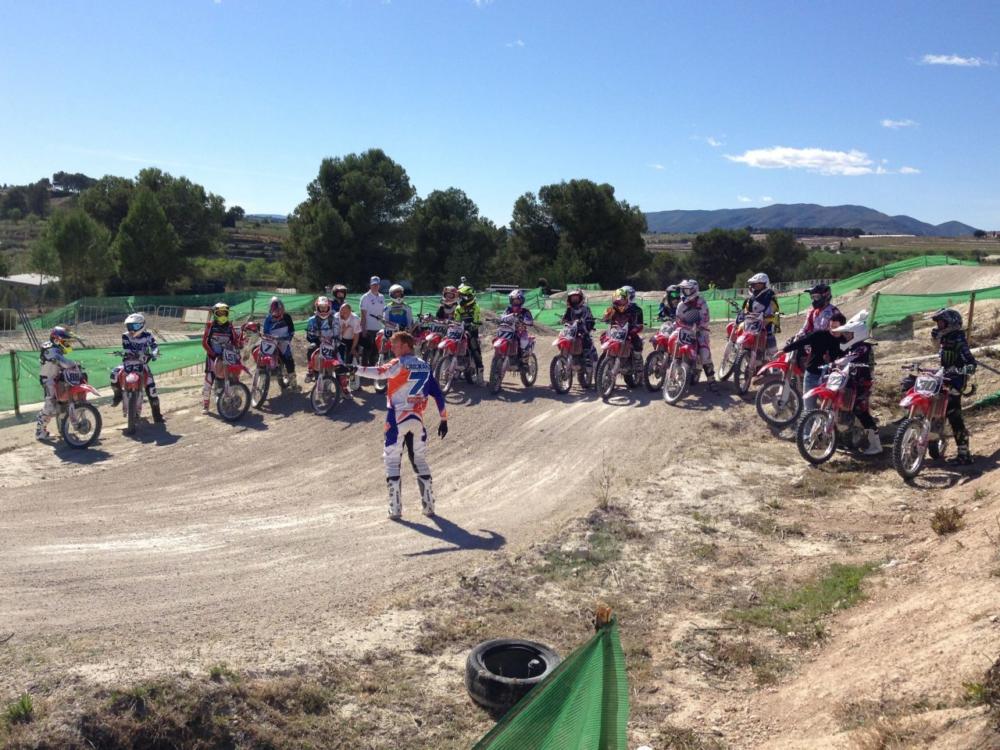 Technology has also taken massive steps forward in recent years. Quite apart from the development of the Honda CRF as a motocross world-beater, now devices such as mobile phones and social media have become really prominent in terms of helping a rider on and off the track. Simple things like re-watching start footage, or checking out a rival’s lines on a tablet right after practice is commonplace in awnings all around the paddock, but it simply wasn’t possible when Crockard was racing. “I owned a camcorder and I had someone film me but even then, you had to have a TV and all the leads and it took so long. Sharing of images and video is a massive help. As a rider now, if you’re struggling on a particular corner you can get someone to film with a phone and you watch almost straight away and see how others are doing it.”

Off the bike, things have been changing at a rate of knots and that has been mirrored in the design of the bikes themselves. Two strokes had turned to four, but the general standard of machinery produced has risen greatly over the years, so much so that there really aren’t any bad bikes being made anymore. This certainly wasn’t the case at the beginning of Crockard’s career. “With four strokes right now, the starting point to refine your bike is already at a very high level. Our Honda teams in MXGP start with a standard CRF450R or CRF250R and the bikes are so good straight out of the box.

“Back in the day, that just wasn’t the case and you could readily identify a number of things you wanted to change and things that you didn’t like.” And that development has really helped even the playing field on the starting gate. “The difference between factory bikes now and a modified stock bike now are very small in comparison to the 80s and 90s. There was a huge difference then. Materials matter. Nowadays, magnesium, titanium, carbon fibre is available to everyone and much more affordable – just look at the spec sheet of the new 2020 CRF450R in particular – it’s really remarkable.”

Sport is an emotive arena, no matter what the discipline, and debates always rage amongst fans about the best era. Well, that’s largely subjective but as Gordon says, there is no clear winner: “Riders in the 1970s, 80s, 90s, or from any period, all wanted to win just as much as racers today. The objective has always been to extract the absolute maximum from your machinery, and as the machinery has developed that’s been the catalyst for changing how riders extract that maximum, whether through fitness, riding style, mental approach… That’s always been the pursuit, so the appreciation of what it takes to win should be the same for any era. You’ve got to have a bike and rider that can go faster than anybody else and it’s important not to lose focus on that.” And that is something that Honda’s Off-Road Racing Manager, someone who won four Grands Prix and multiple national titles across the ever-changing motocross landscape of the 90s and 00s, knows a lot about.