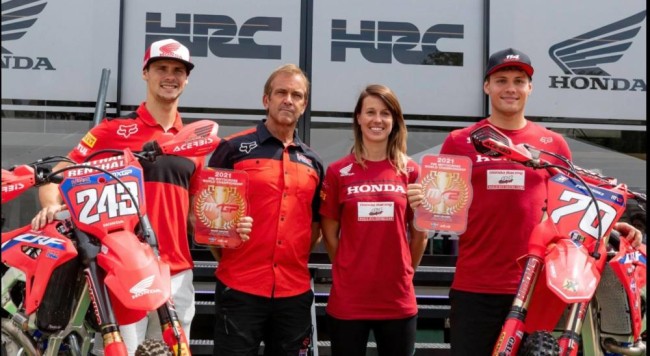 The current era hasn’t seen too much success for Honda in the MX2 World Championship. Aside from Tim Gajsers world title in 2015 and some good rides for Calvin Vlaanderen in 2018 and 2019, there hasn’t been too much to get excited about. Mitch Evans and Hunter Lawrence also had some good results on the 114 Motorsport Honda but were never title contenders which is what Honda want.

However, this year things are looking much better for Honda in the MX2 World Championship after the signing of Ruben Fernandez who’s under the 114 Motorsports Honda awning. The young Spaniard started the season off on fire with two podiums at the first two rounds and has remained consistent ever since. After seven rounds he’s currently sat fourth in the MX2 World Championship.

Whilst HRC aren’t involved in the 114 Motorsports Honda setup, Giacomo Gariboldi has explained the improvements and why the bike is now more competitive than the past.

“We have improved many points in the last two seasons, with the arrival of Pere Ibanez and Ciro Franzon we have now the full package. Pere is one of the most famous engine makers of the paddock and he has been working two years now to develop the CRF engine and now we have reached a level never seen before on a Honda 250, without forgetting that Ruben weighs around 85 kilos and we have to fight against riders 15 or 20 kilos lighter than him”.

“Pere Ibanez, the famous Spanish engine maker who has been working many many years in Yamaha Rinaldi doing the factory engines for Everts and company, and now he is the reference point for Ruben, they speak the same language and Ruben knows where to go when he needs something; Ciro Franzon in charge of the suspensions is another very close to Ruben and Livia Lancelot who has been spending her winter going out training with Ruben and listening to all his needs”.

“In Russia or Matterley Basin on the long uphill’s we could see the CRF not loosing one inch comparing to the factory KTM or Yamaha, that was a great result! On the suspensions side Ciro made a great work during the winter with the set up for the riders and we could see in the first races just how good and stable the bikes were. Beside this the team now has a super crew and Livia is doing a great job on a daily basis with the organisation. Now after 4 seasons I can say that the MX2 Honda setup is at the level I hoped for”, Gariboldi told GateDrop.com.