Geerts on a tough weekend in France as Benistant shines 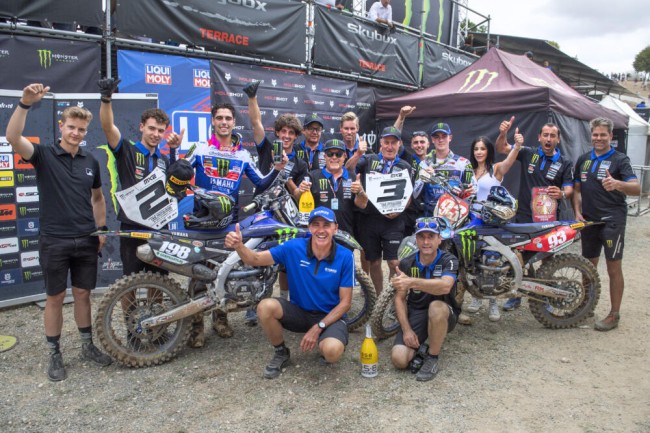 Monster Energy Yamaha Factory MX2 rider Thibault Benistant finished second in front of his home crowd in Saint Jean d’Angely. The Frenchman was joined on the box by Jago Geerts, who was third overall. The Belgian maintains a two point lead in the FIM World Championship.

The FIM World Championship returned to Saint-Jean d’Angély for the first time since 2019. A nice memory for Geerts, who grabbed his first race win back then. The Belgian loves the old school, hard pack track. As is Thibault Benistant. The Frenchman can always bring something more in front of his home crowd. As he showed on Saturday, in the qualifying race. He missed pole position by only two tenths of a second. Geerts had a tough day at the office. The Belgian was riding in third position when he made a mistake and lost a lot of time. Jago dropped back to 11th place and eventually finished eighth.

One-lined track
Benistant got off to a great start on his YZ250FM and was just behind Adamo in the first turn. The French rider quickly took the lead, closely followed by Vialle and Geerts, who had moved up from P6 to P3 in the first lap. Despite a shoulder injury, Benistant stood his ground. No matter how close Vialle and Geerts came, the former European champion didn’t even shudder. Meanwhile, Geerts was searching for new lines to get past Vialle. No matter what he tried, it didn’t work. Benistant took his fourth race win of the season, Geerts finished third.
The start of the second race was almost a carbon copy of the first race, with Benistant again in a second and Geerts in sixth place. Beninstant was all over the back of Vialle in the beginning of the race, but couldn’t get past his fellow countryman. This time, Jago didn’t manage to move up a few positions quickly, as there were not a lot of options to pass on this one-lined track. Geerts was stuck behind Van de Moosdijk for too long. On lap 7 he finally managed to catch the Dutchman. Unfortunately, half a lap later Geerts went down. He lost the front and fell back to seventh place.
Meanwhile, Vialle pulled clear from Benistant, who settled for second place. Geerts tried to fight back after his crash, but wasn’t able to gain some positions and finished seventh.
With only one Grand Prix to go, in Turkey in two weeks time, Geerts’ championship lead is reduced to two points. Benistant remains fifth.

“Not a good weekend for me. I had two terrible starts, which made the job very difficult on this track. It was not easy to find some spots to pass. My first race was decent. In the second race I had to take too many risks to pass. Unfortunately, things went wrong. My lead is reduced to two points. But it ain’t over ’till it’s over. I will work hard the next two weeks and will try to finish on a high in Turkey.”

“This was a solid weekend. I had a good start in both heats. Race 1 couldn’t be better. It was not easy, with Vialle and Geerts in my back until the end. But I managed to win. In front of my home crowd and my family. Awesome! I had another great start in race 2. I tried to follow Vialle, but he was just a little too fast for me. Anyway, I’m happy with a second place in my home GP. The fans were fantastic.”