Gebben van Venrooy Yamaha go through the wars at Loket 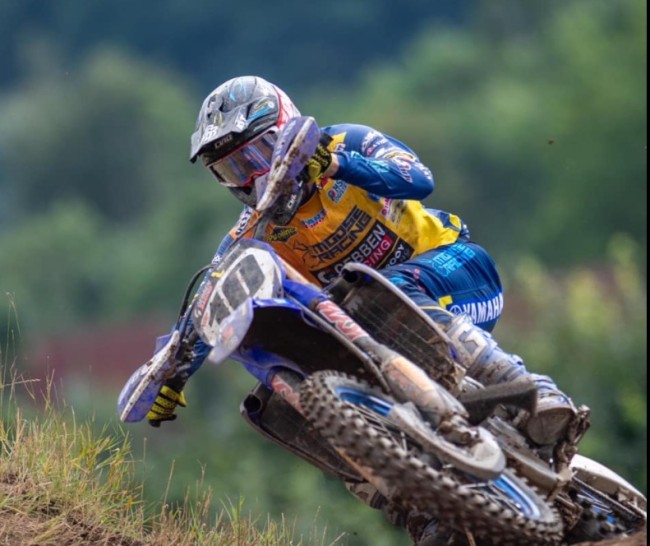 The Gebben Van Venrooy Yamaha Racing team travelled to Czech Republic at Loket with the old-school and picturesque track hosting the fifth round of the MXGP World Championship. A track that was hard pack, slick with plenty of bumps forming to make it a challenging one for the riders.

It was a great start for Calvin Vlaanderen’s day as he posted the seventh quickest time in qualifying to secure a good gate pick. Unfortunately, Vlaanderen couldn’t take advantage of his strong gate pick as he was buried well outside the top twenty. At the end of the first official lap he was twenty-third but despite the track being tricky to overtake on, Vlaanderen had a really good flow going on and was able to make plenty of passes to come home in an impressive ninth.

After a good start in moto two, Vlaanderen was having a storming ride as he found himself in seventh and trying to attack the riders ahead. Whilst on the attack and trying to make a move on Shaun Simpson for sixth, a crash would prove costly. Unfortunately, the bike was too damaged to continue so it was a DNF but the speed was very impressive.

Like Vlaanderen in race one, Kevin Strijbos didn’t get the best of jumps and was finding it difficult to find a good flow around the Loket track. After working his way up to fifteenth at the half way distance, a crash hindered his progress and after hitting his head pretty hard he decided to pull in.

Strijbos decided to line up for race two despite not feeling 100% after his first moto crash and straight away he wasn’t feeling good. The experienced Belgian decided it wasn’t worth the risk and pulled out in order to focus on his home Grand Prix at Lommel hosting the next round of the series.

After a first moto crash at Oss for round four, Brent van Doninck came to Loket and tried to ride but after a few laps of moto one was just in too much pain. The Belgian will go and get a second opinion from the doctor but fingers crossed he will start to feel better soon and that he can race the MXGP of Belgium at Lommel this weekend.

Calvin Vlaanderen (15th overall): It was a great day today, it was just unfortunate about how it ended. I had a good timed practice to go seventh fastest and I had a good feeling going into the races. In the first race I got a terrible start and charged hard to finish in ninth. In the second race I got a pretty good start around tenth and worked my way up to seventh. I had my sights set on fifth being just a few seconds away but unfortunately I went down. It happened so quick that I couldn’t try save it. Lucky I am okay but the bike wasn’t and I had to pull off. I look forward to Lommel next weekend.

Kevin Strijbos (30th overall): It was a difficult day and I didn’t find a flow on a track that I was always pretty good. In timed practice I was eighteenth which sucked actually but the gate wasn’t too important here so that didn’t matter too much but I didn’t feel good. In the first moto I got a bad start and was fighting with myself, not good. I came back to fifteenth when I had a crash and hit my hip and my head pretty hard actually. I had to pull off and the second moto I tried to race but straight away I was out of energy, my head wasn’t good and I couldn’t focus so I pulled off again. It’s a bummer but it’s the way it is. Let’s go home now and try to be ready for Lommel.

Brent van Doninck (31st overall): I tried to ride but already during free and timed practice I saw that I was really painful and I couldn’t push how I wanted. In the first moto I had a not so bad start but after a few laps the pain was just too much. I couldn’t hold onto the bike and with the sketchy bumps it was so painful. I decided to pull out and I feel really sore now. I feel it’s only getting worse to be honest so I will go and get a second opinion from the doctor. I hope this week it will get better so I can ride at my home GP but we will see what the doctor says and what we will have to do.