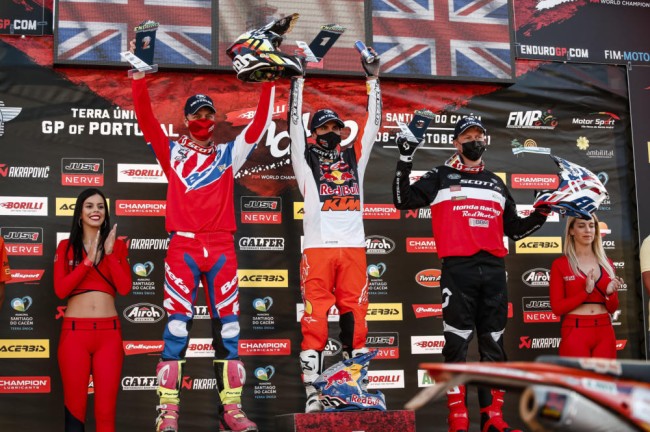 There was double delight for Josep Garcia (KTM) at round five of the BORILLI FIM EnduroGP World Championship in Portugal, with the Spaniard winning the second day of competition to secure both EnduroGP victories over the weekend. Finland’s Albin Norrbin (Fantic) became the first World Champion of the 2021 series when he wrapped up the Enduro Youth class with a win.

After yesterday’s dominant EnduroGP win by Garcia in the TERRA ÚNICA GP of Portugal, the KTM rider was forced to work harder for the top step of the podium on day two. Although off to a flying start by winning the opening NERVE by JUST1 Extreme Test, he faced a much tougher challenge from points leader Brad Freeman (Beta). The British rider was determined not to allow the Spaniard gain any early advantage and piled on the pressure immediately.

At the end of the second Extreme Test on lap two, the duo were separated by less than one second, as Freeman eyed up the race lead. But Garcia was determined to hold him at bay and answered back by topping the CHAMPION Enduro Test. Freeman responded with the quickest time in the following ACERBIS Cross Test and as they began the final lap Garcia’s lead was three seconds.

A mistake by the Spaniard in the final Extreme Test allowed Freeman to momentarily lead, but Garcia fought back by winning the final two tests to take a hard-earned EnduroGP class win. With just two days remaining in this year’s title chase, Freeman now holds a 16-point lead over Garcia, setting up an exciting finale for France next weekend.

“I was a bit bummed out with yesterday’s result, so wanted to bring the pace to Josep today and I managed that,” said Freeman. “I would have loved to get the win, but it was a great battle all day. Props to him on the win, but I hope I can turn the tables on him in France!”

Behind the top two, Nathan Watson (Honda) proved yesterday’s form was no fluke as he upped the anti to claim a podium result with third. The Brit, although ending his day 30 seconds behind Freeman, did repeatedly match the leading duo for pace throughout the day and could prove a danger man in France.

After a strong win on day one, Andrea Verona (GASGAS) faced much stiffer competition on day two for victory. Much more in tune with the tests, Davide Guarneri (Fantic) pushed his championship rival hard. Swapping test wins, Verona just held on by two seconds to top the podium.

With the pace of the top two very high, Davide Soreca (Husqvarna) placed almost two minutes behind in third. However, it was a closely fought podium, with Matteo Cavallo (TM) just six seconds behind in fourth. Samuele Bernardini (Honda) was fifth to ensure an all-Italian Enduro1 top-five.

Enduro2 – Garcia On A Charge

Capping off a great weekend at the office, Josep Garcia also claimed top honours in Enduro2. The Spaniard won all but one of the day’s nine special tests as he looked very much at home in the sandy terrain.

“The battle with Brad today was great and so close for the overall,” told Garcia. “We were pushing all day and the level was so high. It’s been a great weekend for the championship. I’ve gained some points on Brad in EnduroGP and I’m now leading the Enduro2 class heading into the final round in France next week. I hope to finish the season out strong.”

The other test win went to Nathan Watson, with the Brit now looking settled into EnduroGP racing once again. Watson, although 33 seconds behind Garcia, was 44 seconds ahead of Beta’s Steve Holcombe in third. Thomas Oldrati (Honda) enjoyed a solid day for fourth, with New Zealand’s Hamish MacDonald (Sherco) fifth.

With his battle for overall honours intense, Brad Freeman once again pulled clear of his Enduro3 classmates to secure his 10th consecutive win of the season. With a commanding 38-point lead over Jaume Betriu (KTM) in second, Freeman looks set to secure the Enduro3 title with a day to spare next weekend in France.

Betriu was again the next best rider to Freeman in Enduro3 with another strong ride from the Spaniard. Marc Sola (Husqvarna) produced his best form of the season so far, to secure a spirited third. He edged out Sherco’s Daniel McCanney by less than three seconds for the final step of the podium. Jamie McCanney (Husqvarna) was fifth.

Enduro Junior – Pavoni Back On Top

The Enduro Junior class saw championship leader Matteo Pavoni (TM) return to the top of the podium to secure an important victory over closest rival Lorenzo Macoritto (TM) heading into next week’s finale.

Day one winner Roni Kytonen (Honda) was unable to repeat his winning result and had to settle for third behind the two Italians. Leo Le Quere (Sherco) and Max Ahlin (Husqvarna) completed the top five.

Enduro Youth saw Finland’s Albin Norrbin become the first world champion of 2021. Doing it in style, the Fantic rider claimed the title with a victory, to mark his eighth win of the season.

“I’m so happy to have won the world title,” told Norrbin. “It’s been a great season, maybe even better than I expected it to be. Today I just tried not to think about it and go for the win again and it worked out!”

The 2021 BORILLI FIM EnduroGP World Championship concludes with the sixth and final round next weekend in Langeac, France on October 15-17.