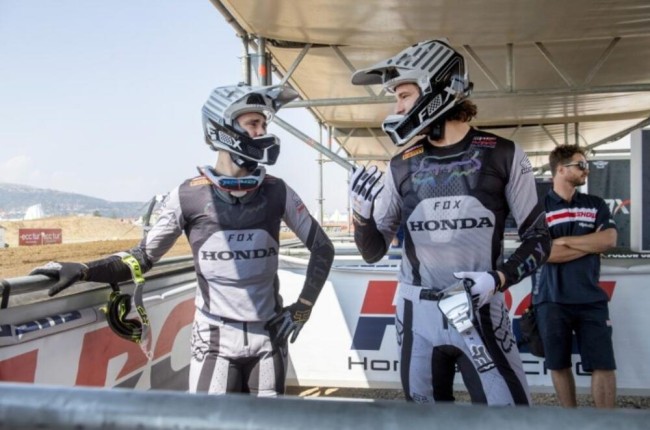 Team HRC’s Tim Gajser finished the season as he started it six months ago, winning the MXGP of Turkiye in and ending this amazing 2022 MXGP World Championship on a high. It ended up being his 10th GP overall of this season, and his 100th career podium and was a fitting finale to another record-breaking year in another excellent event at the Afyonkarahisar track in Turkey.

In race one, a small tip-over in the second corner meant that Gajser started from right near the back of the field, and gave him a lot of work to do on a track that wasn’t easy to pass on. Gradually, every lap he moved further and further forward and soon he was inside the top five. Just as it looked like fourth would be his ceiling, he put in the fastest lap of the race and closed right up to third with a lap to go. In what ended up to be a crucial pass, the #243 made his move and crossed the line in an impressive P3 finish.

Knowing that he would have to improve upon that in race two, he made a much better start and was soon battling in the podium positions. Knowing that all his main rivals were behind him, the five-time champion knew he just had to keep consistent and try to pick off riders when he could, and on the halfway mark that strategy moved him into second. Despite not needing to, the Slovenian tried his best to track down the leader, and another fastest lap of the race got him almost within striking range. However, time expired and he instead settled for second place and his 10th GP victory, in what has been a truly incredible championship.

In what was a day filled with ups and downs, Team HRC teammate Mitch Evans proved he can battle with the very best, leading a number of laps in race one, and then battling for the lead in race two. Unfortunately in both races he was unable to maintain that level for the duration of the moto and he had to retire from race two after a crash just before the finish line. With a couple of weeks off before the Motocross of Nations, the Australian has time to rest up and recover, before preparing himself for what is the biggest event on the motocross calendar, when the ‘Olympics of Motocross’ takes place in RedBud, United States on September 24-25.

For Gajser, he will take a well-deserved break before preparing his assault for next year’s title where he will attempt to become a six-time champion and write himself even further into the world motocross championship history books.

Gajser: It was a great way to finish the season. Winning 10 GP overalls is a great achievement and I really can’t thank the whole of Team HRC enough, for all their work this year and throughout all the years. I also want to thank all the fans who came to Turkey to support me and all those around the world who send me messages. It all means so much and this year and I’m glad you all got to attend the races this year and cheer me on and meet me in person. This weekend wasn’t always the best, but I fought hard and in the end it turned out really well. I like coming to Turkey as they always do a fantastic job with the facility and the track and this year was no different. 2022 has been a great year, and I can’t wait to begin 2023!

Evans: It seems like every time I’m making progress, something happens and I lose that work. In the first race, it felt great to lead the field for the first half and I was riding really well. Unfortunately I hit a bit of a wall, and I couldn’t maintain that level and I dropped down the standings. Then in race two, I once again got a good start and was battling for the lead, when I hit big bump just before the finish line and crashed. Thankfully I am just battered and bruised, so now I just need to have a few days to just relax and recover, before I head to America and try to win the Motocross of Nations with Team Australia.

Marcus de Freitas: Tim winning this MXGP of Turkiye was the perfect way to end this 2022 season. Even though the title has already been decided, he still fought for every position, and posted the fastest lap in both races. He came through from way back in race one to finish third and then did enough in race two to take his 10th overall of the season. A great effort! For Mitch, we really thought he could achieve his goal of a podium, and for the first part of race one it looked really likely. However, we are still proud of his efforts because he never gave up and put in all the work necessary to get back to the front of the field. The results might not always show it, but he is one of the best motocross riders on the planet and we really hope he can put it all together at the Motocross of Nations.