Gajser looking forward to Loket while Evans undergoes another operation 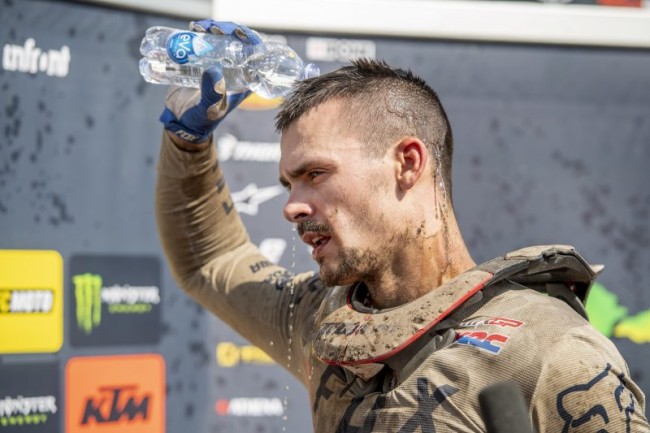 The hard-pack old-school venue of Loket, near Karlovy Vary in the Czech Republic hosts the fifth round of the 2021 MXGP World Championship, and unlike like last weekend in Oss, it is a track that everyone is familiar with.

A mainstay on the GP calendar (except for 2020 due to exceptional circumstances), the hilly circuit continues to provide picturesque views and great racing as the narrow, twisty layout makes passing difficult. Gajser consistently finds himself on the podium there, making the climb in 2019, 2018 and 2016 and he’ll be hoping for more of the same for this year’s event, especially buoyed by the confidence of his second overall victory of the season at Oss last weekend.

While it wasn’t a vintage performance from the Honda CRF450RW rider, he showed an ability to adapt to the surroundings and let the race come to him, rather than force the issue and perhaps make a mistake. It has been impressive to see his race-craft improve this year and there is no doubt that he deserves to be holding the red-plate, by a margin of 23 points.

Unfortunately, he’ll once again be on his own under the Team HRC awning, but teammate Mitch Evans has now had his wrist surgery in Australia and has already begun the path to recovery, after what was a successful operation. Obviously, the #43 can’t wait to be behind the gate once again but the focus is on coming back 100% and it is still too early to give a timeframe for his return.

However, now all eyes are focused on this weekend in the Czech Republic where Gajser will once again try to increase his points lead when the MXGP class take to the track on Sunday 25th July.

Tim Gajser 243
Loket is always a race that I look forward to be at. I usually have a good number of Slovenian fans there and that is always nice, seeing them around the track and hearing them cheer me on. I also like the circuit, as it has good uphills and downhills and just flows very well. It is old-school and I just have a good feeling when I’m there. It will be a lot different from Oss last weekend because I had never been there before, so the bike setup and everything was new, but this should be a lot more familiar and I am excited to go racing again.

Mitch Evans 43
I’m happy to finally be on the mend. The surgery went really well and the doctor said there were no complications. Basically, it all went as expected so I was happy to hear that, and pain-wise I’m good so I started my first physio session today and that well so it is good to be on the right track to getting back on the bike pain-free.
Of course I want to be out there riding with the guys but I’m cheering on Tim and the team and it’s great to see him doing so well. Seeing him winning races gives me the motivation to really put in the work, because I know the bike it is capable, it is just down to me.

Marcus Pereira de Freitas
HRC General Manager – MXGP
Last weekend was a difficult weekend, but one that the team managed to adapt to extremely well. It was a new track, new setup and the weather made it tougher too, but once again the team and Tim kept working hard and the results came at the end. It was especially good to see Tim riding smarter in the tricky conditions. The track wasn’t easy and lots of other riders made mistakes so for Tim to come out on top was great, especially as it meant his lead at the top of the championship increased even further. Everyone has been to Loket a lot of times so there are no secrets, it is just down to getting good starts and riding smoothly and we believe Tim is fully capable of doing that.
It was also nice to hear the positive report from Mitch and his doctor. It has been a tough time for him, but hopefully now he can get back healthy soon, and then join up with the rest of the team. The whole team can’t wait to see him back on the bike.