Gajser: I can’t wait until we go racing! 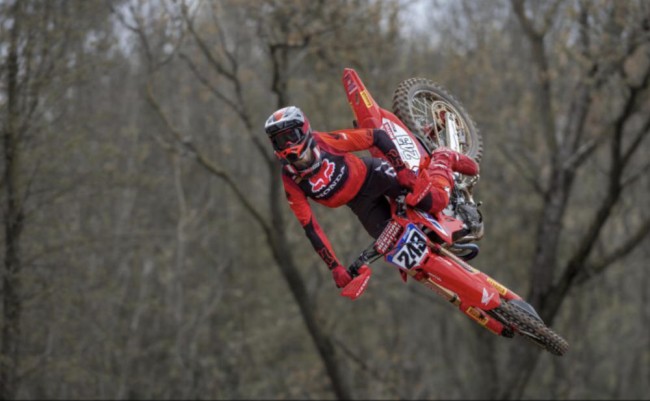 Four-time world champion Tim Gajser will be aiming to make it five titles in the last seven years, when the 2021 MXGP season kicks off in June this year. The Team HRC rider has won the last two MXGP championships in a row and he’s confident that the Honda CRF450RW is once again the machine to propel him to glory, after signing a multi-year extension at the end of last year. Alongside Tim is Australian rider Mitch Evans, who made the step-up to MXGP in 2020 and proved he belongs there after a number of good performances in his rookie campaign.

Currently the season is scheduled to begin at the hilly Orlyonok track in Russia on June 12-13, giving the riders just under two months to get themselves back into race shape after what has been an elongated off-season. Like last year, there is a one-day format for the MXGP class, with all the action taking place on the Sunday, something which both riders took time to adapt to, however once they got into their rhythm, Tim especially was able to qualify with first gate pick eight times in 2020.

Following the successful launch of the new Honda CRF450RW last year, this season is all about improving and tweaking things for what is scheduled to be a tough year of racing. After the weekend off after Russia, there is a scheduled six races in six weekends on a multitude of terrains so Tim, Mitch and the bike have to be fully prepared to tackle whatever obstacles they face. Fortunately, Team HRC are well prepared after a stop-start 2020 season, proving they could come out on top and so 2021 should hold no fear in what they hope could be another record-breaking campaign.

Tim Gajser: “I can’t wait until we can go racing again and start the 2021 season. Even though we finished in November last year, we have still had a long break and I feel fit, healthy and ready for the first gate drop. I’ve had a good off-season, managed to recharge my batteries and I’m raring to go. After the big change with the new Honda CRF450RW last year, this year we have refined a few things and I’m excited to go even better, and show-off the work that everyone has put in behind the scenes. It will be hard to improve upon the last couple of seasons when I became world champion, but I always try to get better and turn my weaknesses into strengths. Before Russia, I will gradually step up my training so that I am ready for that race, but I am also aware that it will be a long season and I don’t want to peak too early. Really though, I just want to go racing and see all my fans again and thank them in person for all the support I have received. I miss all the signing-sessions and the selfies and I really hope that they will be able to cheer me on, along the fence this season.”

Mitch Evans: After re-signing with Team HRC last year, I am really hoping I can showcase my abilities in 2021. I’ve had a difficult recovery from the wrist injury but I know what I can achieve and I think I showed glimpses of that in 2020, so now I am just trying to get myself into a position where I can do it consistently in the MXGP class in 2021. Of course, it won’t be easy as the class is filled with great riders, but I know what I am capable of and I know what it takes to achieve a title as I’m alongside the current world champ under the Team HRC awning. Russia is a couple of months away and I’ll be utilising that time as effectively as possible to come out swinging in round one.