Frederic Vialle on Tom going to the USA 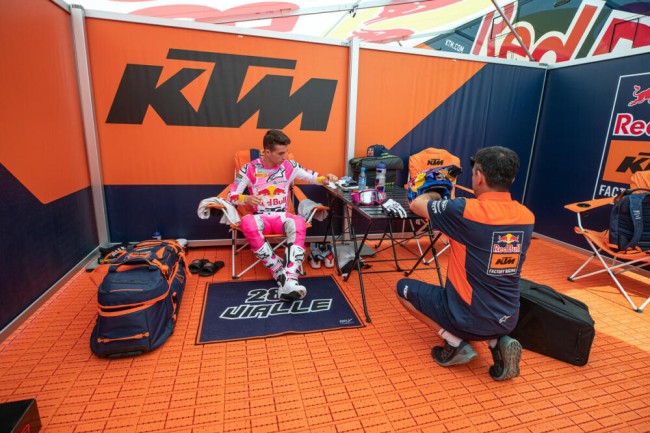 The Vialle family have made a big decision to go to the USA full time after originally agreeing to go to the MXGP class in the world championship for 2023. So what made them change their decision?

We caught up with Tom’s dad, Frederic, himself a former GP winner who also raced some Supercross in America in the mid 90’s, but never went there full time.

Frederic said of the switch to USA: “The decision is Tom’s and the family, because for Tom it’s now or it’s finished for USA, it’s one opportunity with KTM. Tom had one month reflection and then (decided) it’s okay for a new adventure and maybe after it’s possible to come back to MXGP in two years. I like the GP’s and I like the team but now it’s a new motivation and new objective.”

“Normally it’s okay, Supercross is a completely new discipline but it’s necessary. For Tom at 18/19 it was a big step to go GP with a factory bike, so for me it’s more easy to go to the USA than going from the EMX series to GP. Tom did ride in the French Supercross series and had good results.”

“In US it’s different,” he continued before looking back at Tom’s consistent success in the MX2 World Championship, “In GP’s he has nice results and a good experience with a lot of work with Tom and Joel Smets. It is a high level with Jago Geerts, he is a very fast guy and it’s not easy. For four years and Tom to be on the podium all the time, it’s incredible.”

With two rounds to go and 15 points behind heading into his home GP in France, Tom Vialle will once again be duelling with Jago Geerts in a bid to head across the atlantic as a two time MX2 world champion. But after the final two rounds of the 2022 Grand Prix season the decision has been made and the objective is clear – Supercross in 2023 is priority with Tom confirmed not even to be going the MXoN with France at Red Bud.

The Frenchman admitted to us back in Lommel he wasn’t sure if he would be doing MXoN, telling us, “I am not sure with the America stuff, I am not sure if I am going.” Get Tom’s view on his decision to go to the US here.