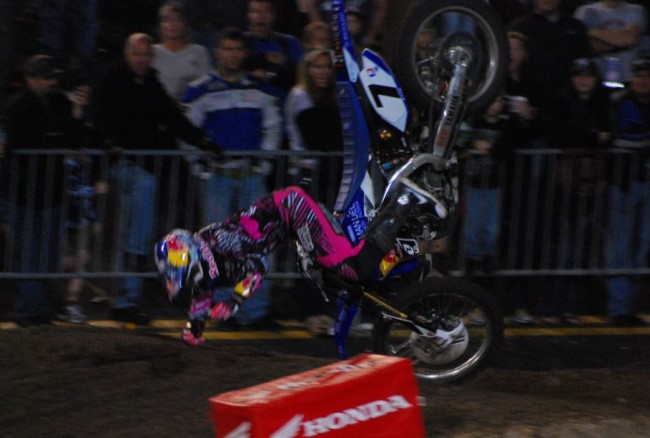 The Daytona supercross has always been a unique event and one of the biggest races of the US season, so here are some memories and moments that really stick out in my head when I think back to the iconic race.

This was a race that encapsulated the at times simultaneous brilliance and carnage of James Stewart’s career. The American was capable of doing things no-one else could do thanks to his bravery and amazing talent as he did here at Daytona over the wall jump, but once again, not knowing when to turn it down a notch caused him to eventually crash out, costing himself the race win. One minute you are baffled by his brilliance the next baffled by his crash while seemingly having it all under control out front.

This was superb as Chad Reed went head-to-head with Ricky Carmichael on the Floridian’s home turf and a track he was always superb at to beat him straight up in a brilliant race. It was also the last great two-stroke battle at Daytona as everyone went four-stroke for 2006.

This was the race that gave Carmichael some light at the end of a long, dark tunnel in the 250 class. The American had struggled after going to the 250s indoors in 99 with big crashes and, while he was more consistent in 2000, he didn’t challenge for the win really until he dominated in Daytona. Carmichael didn’t see it as a true supercross win because of the outdoor nature of the track, especially back then with it being ran in the daytime, but this was his first win in the class, he then went on to win the 250 outdoor championship and the year after he destroyed everyone to win his first ever supercross title. This was a breakthrough win.

Main event at 54 minutes in:

This was memorable simply for the mud and the fact that Chad Reed cruelly lost a hard-earned win right at the death when his bike gave up!

The race both years signified who was the main man in both seasons between the two rivals with Jeff Emig having the year of his career in 1997 winning the supercross and outdoor title and leading the entire Daytona supercross to show everyone he was the man to beat by winning the most grueling supercross of the year. In contrast Jeremy McGrath couldn’t quite get close enough on the day or during an ill-fated year on Suzuki.

But by 1998 it had all changed again with McGrath back in charge of supercross and now on Yamaha, passing Emig to win with the Kawasaki man struggling all year on and off the track after losing his focus following the perfect year in 1997. The Daytona supercross was always seen as weakness for McGrath in his early years when training wasn’t his thing but he won it in 96 then again in 98 and 99 to become a three-time winner of race many said he wasn’t fit or strong enough to be victorious at!