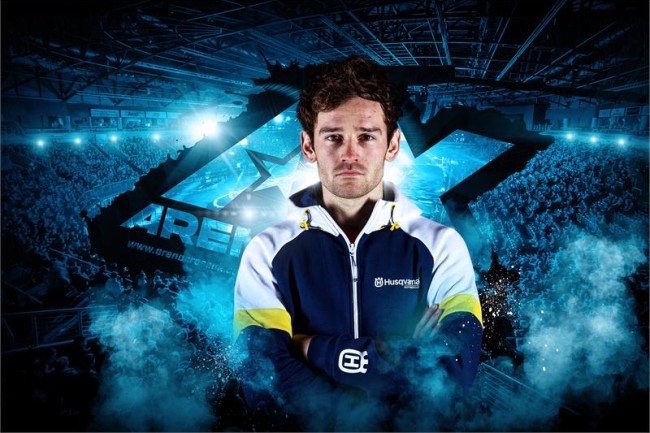 The 2023 Arenacross Tour presented by Fix Auto UK Pro class continues to entice the best of British riders to its ranks with the announcement that former two-time British Motocross champion Elliott Banks Browne will join the heady line up next year.

Banks Browne, aka EBB, is one of a few British motocross racers who has held his own against French supercross specialists in the Arenacross stadium. He will run under the team umbrella of Mark McCann 64 YouTube, riding a Geartec Husqvarna 250. He’ll join forces with Joe Clayton – a talented double Arenacross Pro Lites champion – on a 450 GasGas, creating a formidable partnership.

FRO Systems boss Mark McCann has enjoyed tremendous Arenacross success, winning the Pro class championship in three consecutive years. His plan for his team’s 2023 involvement is for it to provide considerable exposure for his Mark McCann 64 YouTube platform, generating great content and thereby promoting the UK motocross scene as a whole.

Commenting on his upcoming return to Arenacross, thirty-two-year-old Banks Browne said: “I’ve contested Arenacross a few times now and have won against the French, which was incredible. With that knowledge, and the fact it’s a completely British series, I feel I’ll start the series in a strong position.

“I haven’t ridden for Mark before, but I’ve had dealings with him and he’s a cool guy. He always puts the team first and creates a relaxed team atmosphere. Joe will be a great team-mate. He’s young, enthusiastic, respectful and is bang on it when it comes to Arenacross racing. We’ve previously trained together at his family’s Wheeldon practice facility.

“The racing will be really close and I’m expecting some tough battles. I’m grateful to Paul of Geartec for continuing to support my racing and feel we have the best package for Arenacross 2023.

“I now have a couple of little ones, so I’m also looking forward to my family being able to come and watch, cheer me on and just enjoy it all.”

Team boss Mark McCann; “As an independent team, we’ve had a remarkable run with Arenacross – three consecutive Pro class wins! Our philosophy as a team and business it to go out and win, we’re not in it to make up the numbers. We’ve chosen Elliott and Joe as they are both hungry to win. In Joe, we have a young Arenacross specialist and in Elliott, we have an experienced former British Motocross champ, who has also excelled against the international racers in the Arenacross circuit.

Series promoter Matt Bates; “It’s hard to remember that Elliott is a twice Main Event winner at Arenacross, and one of the only British riders to have ever taken it to the ever-dominant league of French riders and beaten them at their own game. In my opinion, EBB lines up as one of the firm favourites and proves that once again, the line-up of British riders now taking on Arenacross is the best ever… roll on January.”