Eli Tomac: I need to make some passes stick earlier in the race 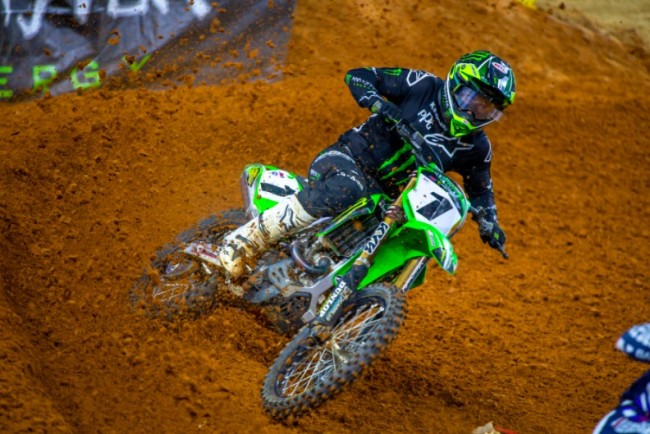 Round 12 of the Monster Energy® AMA Supercross, an FIM World Championship completed its third and final stop in Arlington, Texas on Saturday night where Monster Energy/Pro Circuit/Kawasaki riders Cameron McAdoo and Seth Hammaker both put their KX™250 motorcycles on the podium with second and third place finishes respectively. In the 450SX class, Monster Energy Kawasaki rider Eli Tomac raced to his sixth podium of the season with a third-place finish.

For Tomac and his Monster Energy Kawasaki, Saturday began on a positive note in qualifying as the No. 1 KX™450 rider clocked a 48.218 lap time, good enough for second fastest in combined qualifying.

In the first 450SX heat race of the night, Tomac rocketed his KX450 race machine to a top-2 start. Sitting in second, Tomac began creeping his way closer to the leader to within less than one second, and on Lap 5 he was able to make a pass stick for the lead and never looked back.

As the gate dropped for the final 450SX Main Event in Arlington, it was Tomac who launched off the gate to a third place start as they rounded Turn 2. Tomac followed behind the championship points leader for nearly the entire race waiting for the right opportunity to pass, before a slight mishap over the finish line jump shuffled him back one position. Determined to right his wrong, Tomac found the right opportunity to regain his podium position in third place and although he set the fastest lap of the race, he ran out of time to catch the leaders and finished third as the checkered flag waved.

Eli Tomac: “My KX450 was hooking up great all day. I know my speed is there and the bike is working great, I just need to work on cleaning up a few little things and making some passes stick earlier on in the race. I kept getting close to Cooper (Webb)’s rear wheel and just needed to make something happen. I am looking forward to having this two week break and get ready for Atlanta’s three races.”