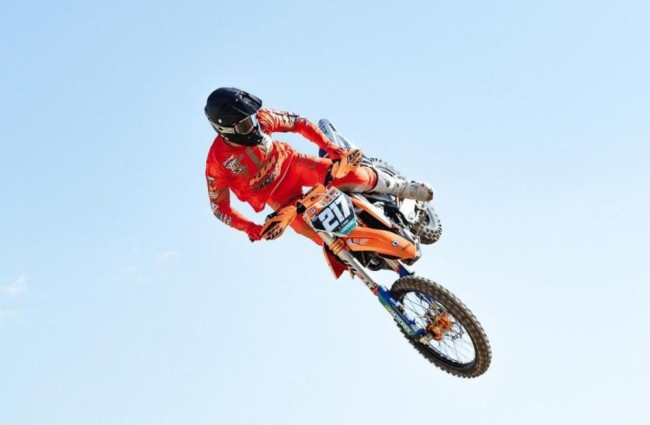 Back in April, young British talent, Eddie Jay Wade suffered a serious head injury but he’s made a faster recovery than first anticipated. Jay Wade has been back on the bike the past five weeks and after a slow start he finally feels good on the bike again.

We caught up with him to discuss his plans for the rest of the season and how his first race back at the French Elite MX2 championship went for him.

On getting back on the bike…

I started riding around five weeks ago to see how I felt on the bike It was strange at first I must admit but then after a few laps it all began to feel good again. I have spoken to KTM and expressed I would like to stay with VRT, it’s a very good team and have the same goals that I do. They are happy for me to stay with them but can’t guarantee anything as nothing is certain because budgets haven’t yet been agreed. I am at the moment back in France training with the team again. I have learned so much this year from the team, my accident was such a set back because I really felt I was going to have a good year after all the hard work I had put in over the winter training. Budget will probably depend on results from the last remaining EMX250 rounds so fingers crossed. My fitness is not where it should be after such a long time off the bike but I am working hard to be the best I can be.

What a track to ride on for a start, amazing. Qualifying went well, was P1 all the way to the last lap then got pushed to fourth, but happy with that. The first race, a decent start, was in P5 for the first lap then cased a jump onto the start line and kicked me off the bike, then I couldn’t pick it up because I was in a blind spot so had to wait until everyone had come past, not good. After that I felt good and managed to come back up to P15 matching the front runners lap times. It was the first one out of the way after a long time so felt more comfortable for the second. I was P3 out of the gate then straight to P1 around the first corner and started to pull a nice gap until the second lap when I had a mechanical failure and wasn’t able to finish. Very happy with my speed to say how long I’ve been back and looking forward the EMX250 rounds.