Dylan Ferrandis: I start to feel like I’m part of this 450 pack! 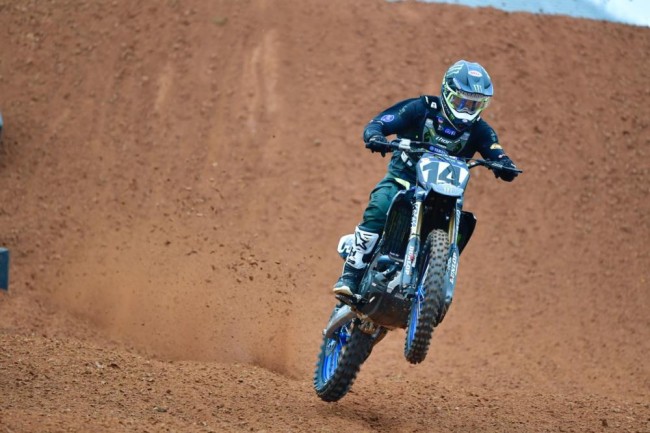 Dylan Ferrandis arguably had the best ride of his 450 career on Saturday a Atlanta with the French rookie coming from a first corner crash all the back to fifth including a pass on Ken Roczen! Ferrandis told the media he now feels he belongs in 450 division and has higher expectations for the outdoors than he had coming in his first year on the 450 indoors.

What happened off the start, and what did you do in the last, say, five minutes? You basically passed five guys in the last four laps.
The start I just had a bad start and at the corner I just slipped with my rear wheel and crashed in a stupid crash. So, nothing crazy. I don’t think anybody touched me or whatever. Then I just charged through the pack. I was feeling good. The speed on the bike and physically I was good. Just gave everything I had until the checkered flag. At the end maybe I had a little more speed than some guys and I think in the last three laps I passed many guys and finished fifth. So, it was really good. I did nothing crazy. I just gave everything I had. The guys in front maybe slowed down a little bit at the end. I don’t know. I just found myself fifth.

Are you happy because you’re riding well or are you frustrating because it’s not resulting in results?
For sure I wasn’t happy because we had some struggling with the bike, I think all the riders and team. Like I said in the past, it’s the first year at Star Racing team with the 450, so everybody is just learning the bike, learning the program, learning how a 450 works. It’s hard. So many good guys, just getting a good start is so difficult. Everybody is learning. The bike is a good bike for sure, but I think it needs just some adjustments for every rider. I just understand lately that I’m riding different than my teammates, so I need a different setting. That’s what we found. We made some changes during the break the last two weeks off we had, and it kind of paid off. I feel much better on the bike and I could ride like myself, which I kind of couldn’t do before. So, I think that was a good step in the right direction.

You were kind of talking a little bit about the ups and downs mentally of going through the 450 class. You’ve had a couple rides in the last few rounds here, going back to Orlando where you almost went a lap down but then you stayed right in front of the leaders the whole time, and then this one where you came from dead last to finish fifth. Do you come off the track after those satisfied with your riding, or are you frustrated that you couldn’t show that you had speed to run up front or potentially win?
Every time I’m not on the podium I’m not really satisfied. For sure, Orlando was good that we could see that I still had the speed, and the bike was working great. Yesterday the same. We still see that physically and the speed was there. It’s kind of the light at the end of the tunnel. I ride for wins. Until I’m on the podium, I’m not really happy. I need to work on myself on that because like I said before, only one guy can win and sometimes I’m a little too mad and I shouldn’t be, because the riding is not so bad. So, it’s really hard but I need to learn that. The 450 is hard.

At the start of the season, you mentioned it took a while for you to feel you belong in the 450 class. Do you feel you belong now? Will your expectations for outdoors be higher than they were for supercross coming in?
I think yeah. I start to feel like I’m part of this 450 pack. I’m still focusing on supercross. I really want to try to get one more podium before the end of this season, so I’m really focused on that. For sure the outdoors are going to be important. I feel that I have some good chance of being out front, because we did some testing the last two weeks and the bike was good and the feeling on the outdoors was really good. So, we’ll see. But again, it’s going to be my first year. There’s a lot to learn. Again, there’s so many good riders. It’s hard to say I’m going to win the outdoors. You can’t. But for sure, I think for the first year, the outdoor season could be a little easier than the supercross season where you have to learn a lot and to make your bike really good for the 450 main events.