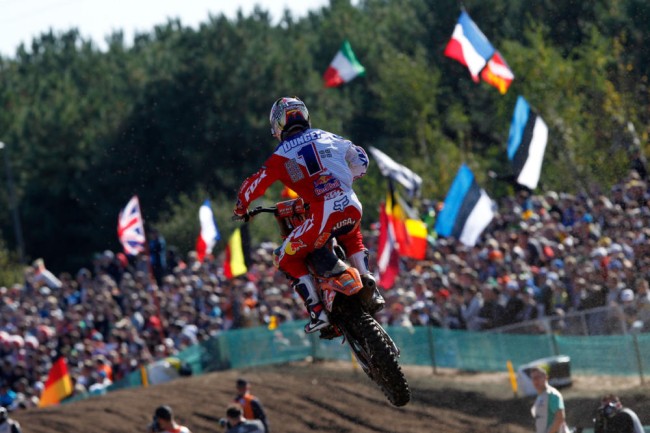 In conjunction with his new RD coffee business and website, Ryan Dungey has posted a couple of interesting and must-read blogs about his experiences winning and losing the MXoN and his awe of the event.

He talks in detail about his storybook 2009 experience saying he came into that event in Italy having recently dislocated his shoulder. But he did admit that he knew nothing of the world championship of the sport and didn’t know how fast Cairoli, Musquin and Roczen were or the world championship success they had had, but felt that his ignorance of MXGP maybe even helped him! “I didn’t watch much MXGP racing prior to my first MXoN, and that was probably a good thing. I had certainly heard of Antonio Cairoli, Marvin Musquin, and Ken Roczen, but I wasn’t aware of how talented they truly were and all the success they had achieved. I think that lack of knowledge kept my mind clear on the starting gate. My shoulder was nowhere near 100%, but I was ready to perform for myself, my team, and my country. I had no reason to think I couldn’t compete up front.”

Dungey also talks about the Lommel sand in 2012 and his first defeat in terms of the team, saying: “It seemed like the Europeans were determined to find a way to stop us, so they selected perhaps the single-most-difficult track on the planet for that year’s event – Lommel in Belgium. For us pro racers here in the U.S., sand riding is a technique the majority of us don’t really need to develop. There’s only one sand track on the Pro Motocross calendar and Southwick isn’t anything like the kind of sand tracks they have in Europe. The sand here isn’t a big departure from the style of tracks we’re accustomed to riding. However, Lommel is unlike anything else in the world. It’s like a beach. A seemingly endless pit of deep, loamy sand. If you’re fast there, you can be fast anywhere, and it’s probably why so many MXGP riders spend so much time training there.”

But even in the years he didn’t win, a humble and giving Dungey wanted to help the other riders on the team and enjoyed giving his experience to the squad saying: “If I could help a young teammate, particularly a first timer, feel a little less overwhelmed by it all, I felt like it was my duty as Team Captain to try and do so. While we unfortunately missed out on getting back atop the podium in my last three years at the MXoN, I hope I helped make it the memorable experience it still should have been for those involved.”

Make sure to get Ryan’s full, detailed and interesting perspective on his MXoN years by going directly to his blogs, for the 2009 MXON go here and for the rest of his MXoN experience go here. For more on his new coffee business, go to RDcoffees.com