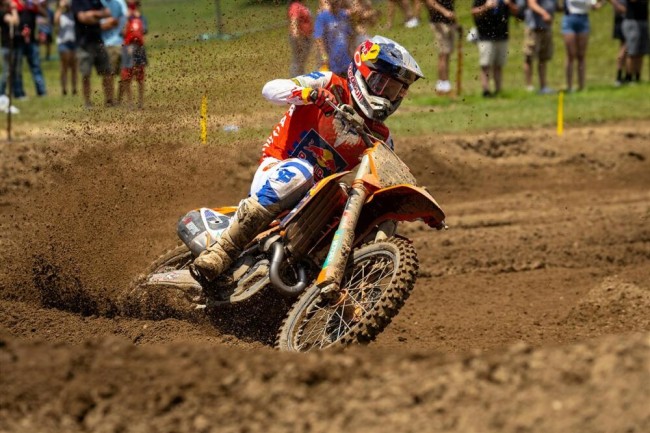 The Red Bull KTM Factory Racing team landed in Buchanan, Michigan on Saturday to celebrate America’s Fourth of July weekend at the crowd-favorite KTM RedBud National. With a warm welcome back to the Midwest, Ryan Dungey highlighted the team’s efforts in the highly-competitive 450MX class with a solid seventh overall at Round 5 of the AMA Pro Motocross Championship.

Dungey got a ninth-place start in Moto 1 and he rode just inside the top-10 for the first couple laps. Meanwhile, his teammate Aaron Plessinger jumped in behind him and the Red Bull KTM duo raced their KTM 450 SX-F FACTORY EDITION machines to just outside the top-five battle, with Dungey ultimately finishing sixth and Plessinger in seventh.

In Moto 2, Dungey positioned himself with a much better start, in fourth, and he mixed it up inside the top-five for most of the race. Reclaiming the fourth-place spot late in the race, the veteran rider held strong into the final lap but he was eventually overtaken by Jason Anderson just before the finish, giving him fifth in the moto and seventh overall.

Ryan Dungey: “We felt good today and the motor has been good, too. My starts weren’t that great today so I had to kind of work through the pack a little bit and that didn’t make it easy on me. Overall, we’re good. We’ll try to get a little bit better going into next weekend but I’m happy with the progress overall and where we’re at, looking at the times and how close we are there. We’ll just try to keep building every weekend.”

With a 13th-place start in Moto 2, Plessinger had his work cut out for him on the opening lap but he put his head down and charged early on. With a stacked field in the 450MX class, Plessinger found himself battling with the top riders from sixth to 10th and he finished strong with a solid eighth to round out the weekend in ninth overall.

Aaron Plessinger: “In the first moto, I kind of struggled with bike setup a little bit. I got a pretty good start and then kind of pumped up and rode tight, so I went back to ninth. Second moto, I didn’t get the greatest start but I came through to eighth. I felt a lot better – I was flowing, I was wheelie-ing bumps and the bike felt a lot better. We’ll go back and do some homework this week, work on my starts a little bit more and see what Southwick holds for us.”

In the 250MX class, Max Vohland struggled to get through the opening laps cleanly all day, resulting in a pair of 11th place results at Round 5. He got taken out after the start of Moto 1 and found himself back in 24th on the first lap. He steadily climbed up to 13th midway through the race, finishing strong in 11th. In Moto 2, Vohland once again experienced carnage with another rider after the start and he rounded the opening lap around 20th. Putting in another great charge, he ultimately came away another 11th in the second moto and 12th overall for the day.

Max Vohland: “The weekend didn’t go how I wanted it to. I ended up getting taken out on the first lap in both motos, which set me pretty far back in the pack and I had to fight my way up. One positive, my starts were a lot better than the last race, so I’ll take that and go back to work this week. We’re going to try and be more consistent in the motos, try and stay off the ground and see what we can do at Southwick.”

The 2022 AMA Pro Motocross Championship heads to Southwick, Massachusetts next Saturday, July 9 for Round 6 of the 12-round series.