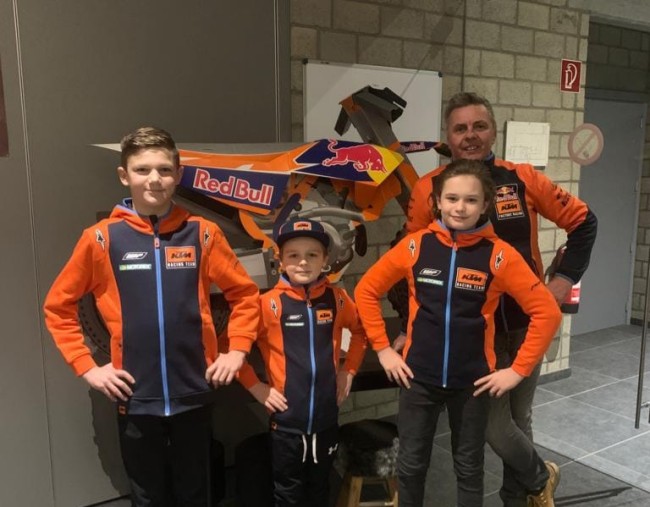 For the coming season the DVS Junior Racing KTM team will compete with three riders in the EMX65 and EMX85 championships. Dirk Vansummeren who was active in the EMX125 last season is motivated to help some bright young talents.

Young British rider, Harry Dale will compete in the EMX65 along with young Dutch talent, Dean Gregoire with Belgian Jarne Bervoets in the EMX85 class!

Despite only being the age of 8, Dale is already a two-time ONK champion. In 2020 he won the 50cc title and in his first 65cc season he also won the title straight away. The Liverpool-born motocross rider will be active in both ONK and EMX in 2022.

11-year-old Gregoire is also a two-time ONK champion. The youngster from Geldrop won the 50cc title and won the 65cc title in 2021. Then the switch was made to the 85cc and he immediately qualified for the EMX85 final in Italy. With six points, he managed to put himself in a positive image with the general public.

The Bervoets name is new to KTM but needs no introduction. Jarne Bervoets is of course the son of multiple GP winner Marnicq. Like Gregoire, the friendly Belgian qualified for the EMX final, scoring three points. The 12-year-old motocross rider managed to achieve some strong results showing that he is made of the right stuff. The riders’ program will consist of the EMX65 and EMX85 North-West. The goal for the EMX championships is initially to qualify for the grand final in Czech Republic at Loket.

In addition, the 2022 Junior World Championship will be held in Vantaa, Finland. The riders also hope to be able to compete there at the end of August. Later in the season, the team will look to expand the calendar with races in the Netherlands, France and Germany

The team want to thank all the people at KTM Austria who are involved in this project and let’s get ready to race in the 2022 season.