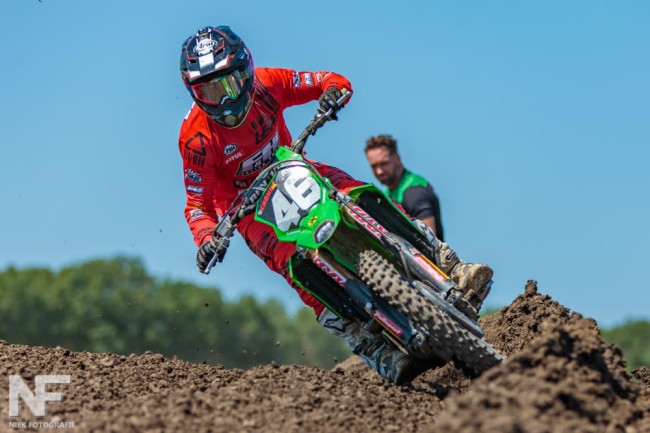 Since moving up to the 250cc, Davy Pootjes just hasn’t had an easy time of it thanks to injuries. It’s a real shame because the Dutch rider has so much talent. We saw what he could do on an 85cc and 125cc but after missing last year, he’ll also miss the 2021 season through injury.

Pootjes posted the following update on his social media reflecting on his difficult times.

“It’s been almost a year since I crashed, we were training in France for two weeks, everything was going very well. As people know, I hadn’t spent a lot of time on the bike due to my multiple previous injuries, I needed to get back into shape, speed, spend more time on the bike to come back for make up for all the lost training hours. It was going better and better each time, the physical form was back, mentally, I was good.

During this time in France, just before the start of the season and the arrival of COVID-19, during the last practice, there was a right turn, a small jump and a big descent. Coming out of the turn, I had a little crash, the kind of crash that happens every day when you’re riding Motocross. Only this time, unfortunately, the motorcycle landed on my arm and crushed it on me. I had a quadruple open fracture of the ulna (forearm), tore all the muscles in my biceps and damaged the nerves. I was operated on immediately in France, I lost a lot of blood, my arm swelled a lot. They put on plates and screws, I should have stayed in the hospital in France for a week but the next day after they opened my arm to release the pressure and decrease the swelling, I told myself that the hygiene of the hospital was not up to power. No one spoke English apart from the surgeons who I couldn’t see coming to my room, I couldn’t talk to anyone, I didn’t know what was going on with my arm. So we decided to go to the hospital in Belgium, a hospital that I knew, I stayed there for a week.

At first, I was like “Okay, it’s a fracture, the bone is going to come together again and I’m going to ride again”. But then, we really realized that all the muscles were torn, that the nerves were damaged, and that my arm was essentially only holding on thanks to the radius. We then wondered if I was going to get my arm back, and if so, we knew it was going to be really very long. I had surgery 5 or 6 times, they redirected the nerves and tendons. The bone was not consolidating, so they also put a piece of bone in my arm, which also did not set properly. In Belgium, they did not open my arm to release the pressure accumulated on the muscles and nerves, so the healing process was very, very long, my bone was not consolidating as my body was focusing on healing my muscles and nerves. From now on, we have to wait, and we’ll see if everything will come back as before with my arm, and if my bone decides to consolidate.

I haven’t posted anything on the internet for a while now. At first, I just said I broke my arm in training. Everyone knows that I have been injured a lot over the past 7 years. I’m not a crazy rider, but things haven’t been going well for me lately. You train hard, you do everything you can, physically and mentally, I was ready. This injury was a big blow to morale, I went through a very difficult period. Sometimes you feel bad about seeing people, or having to post the news on social media. You are there, with chances of losing your arm, and you have people who say to you “You better stop and start doing a real job, go to the construction sites”. I don’t care what people say but the last 7 years have had an impact on me.