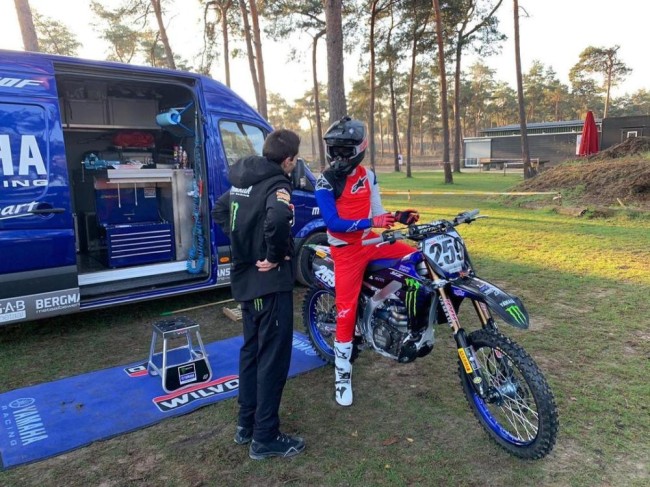 Glenn Coldenhoff has been a prominent MXGP Grand Prix winner for the past two seasons and is now co-leading the Monster Energy Yamaha factory effort for 2021. The soon-to-be 30-year old’s move from Standing Construct team where he claimed trophies both with KTM and GasGas equipment was one of the more curious transfers of 2020. Possible financial reasons aside, Coldenhoff had a competitive motorcycle in the confines of an effective and productive unit; a squad that actually helped him to his very first victory in the MX2 class in 2013.

“A decision like this is never easy, especially when you need to choose between two really good teams,” he admitted “I think I made all the best results of my career with Standing Construct. I’d been five years with KTMbut I felt that Yamaha were really interested very early. They made me a good offer and I went to the workshop and saw the whole set-up. With their structure it is clear they are one of the best in the paddock.”

“I felt I was ready for a change,” he adds. “Yamaha seems a big set-up but, having been there a few months, everybody knows their place. The general picture means [Michele] Rinaldi is involved, and the facilities are in Bergeijk [southern Holland] which was also good for me.”

Monster Energy Yamaha – run by Louis Vosters and the former Wilvo Yamaha set-up – is one of the more resourceful outfits in MXGP but Coldenhoff is still taking a risk in trying to adapt to Japanese machinery for the first time since 2015. He is also breaking away from a half-decade relationship with Red Bull for a rival drinks brand.

“I knew the KTM and GasGas well and I knew how it would act and behave,” he says. “For sure the Yamaha is different and reacts differently. I just need some time.”

Coldenhoff sustained the second thoracic vertebra injuryof his career at the Grand Prix of Flanders that prematurely ended the 2020 campaign and delayed his immediate possibilities to ride and test the Yamaha. He has since spent time in Italy from mid-January working with Michele Rinaldi’s crew.

Coldenhoff has been hired by Yamaha Motor Europe both for his competitiveness and his acumen, experience and sensitivity with a 450 motorcycle: he had previously raced for Suzuki, KTM and GasGas in MXGP. While the 2021 season is slated to start almost a month later than usual,#259 knows he has to rapidly get a feel for the YZ450FM.

“I didn’t do any testing while I was making the decision[to move brands],” he explains. “But since I started working with the team I had the feeling that they could make a bike for me that I’d like. I knew there was so much knowledge in the project through Rinaldi and Japan that they would make it work, and there was no real need to get worried.”