Cianciarulo and Tomac on Pala 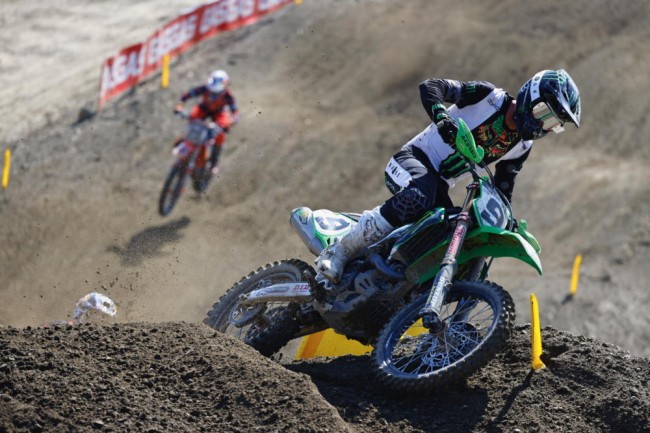 Round 1 featured clear skies, mild temperatures and sunshine along with the energy of fans lined up alongside the fences, making it the ideal setting for the opening round of the 12-round series. Cianciarulo didn’t disappoint as he set the tone early in the day after setting the fastest qualifying time with a 2:18.793, while Tomac paced himself for the motos and qualified 11th.

The first 450 class moto saw Monster Energy Kawasaki rider Cianciarulo shoot off the line to a third-place start, making quick work of his opponents to take the lead on the first lap. After building almost an eight second advantage over the 40-rider field, Cianciarulo lost control of his motorcycle causing him to tumble down of one the steep downhill sections and had to quickly regroup, remounting in third place. Despite his best efforts, Cianciarulo would ultimately cross the line in seventh place. Teammate Tomac maintained his speed and smooth riding for the duration of the moto. He started the race in 14th position and was able to battle through the field and gain five positions by the end of the moto finishing in ninth place.

Moto 2 got off to a similar start, with both Cianciarulo and Tomac charging hard as they rounded the first few turns. Cianciarulo completed Lap 1 in fourth place and settled into a rhythm that would carry him to a 12th-place finish and 11th place overall on the day (7-12). Tomac started his moto outside the top-10 but quickly found his pace, running faster lap times as time went on and reeled in his rivals one-by-one. In Tomac fashion, a late-moto charge gave him the edge he needed to break inside the top-10, working his KX™450 up to eighth place by the time he crossed the checkered flag for a ninth-place overall result (9-8).

Eli Tomac: Overall, it was an alright day. It wasn’t my best result, but we managed to put together two consistent motos and deal with the difficult track. I’m looking forward to Thunder Valley next week, especially since it’s my home track. We’ll take the week to get everything dialed and plan to be back on the top step where we belong.”

Adam Cianciarulo: Even though the result wasn’t what we hoped for today, there were a lot of things we can build on for the season. I’m staying positive and I’m glad we can shake off those first-round jitters. We can now focus on getting back up on that podium where we belong. We know what we need to work on, and I can’t wait to get back out there next week.”