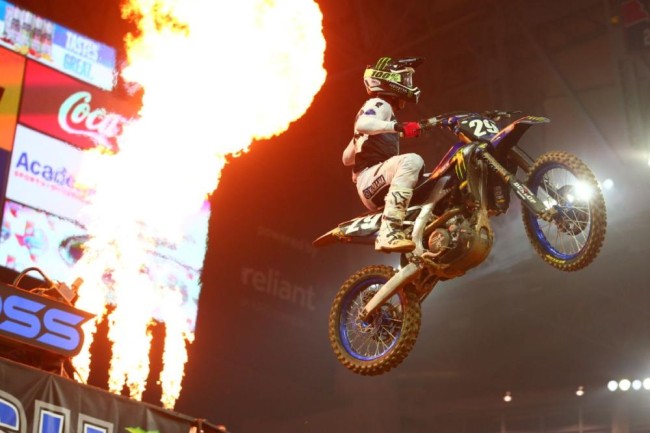 Monster Energy Star Yamaha Racing’s Christian Craig fired the first shot in the 2021 250SX East Championship with a dominant win on Saturday night in Houston, Texas. Colt Nichols came out on top in the battle for third to give the team a double podium at the Monster Energy AMA Supercross season opener.

En route to his second career win, Craig was the fastest qualifier and won his Heat. When the gate dropped for the Main Event, he got off to a good start in second and made his way to the front on the first lap. Craig put in some consistent fast laps to go unchallenged and cross the line five seconds ahead of the competition. It was an emotional victory for the Californian which marked the end to a five-year win drought and a dream start to his debut season with the team.

Nichols had a solid start to the day qualifying third but unfortunately had to fight his way back from a bad start in his Heat to finish fourth. He got a better start in the Main Event, just outside of the top five. The Oklahoman moved into fourth before the halfway mark and with the final podium spot in sight, he kept pushing. In the final minutes, that battle really started heating up, but Nichols kept his cool and crossed the line third.

The Monster Energy Star Yamaha Racing duo gets a short break before action resumes at the NRG Stadium in Houston, Texas, on Tuesday, January 19, for Round 2 of the Monster Energy AMA Supercross 250 SX East Championship.

Wil Hahn
Monster Energy Star Yamaha Racing 250 Team Manager
“It can’t go much better than that. Christian was the fastest qualifier, won his Heat and the Main, and then Colt finished third for a double podium. I think we definitely can keep the ball rolling and that the Saturday-Tuesday-Saturday-race schedule will be nice for our momentum. It’s just exciting. You never really know where you’re at during the offseason. You have an idea, but it’s nice to get to the first race and know what you’re doing and see that the hard work pays off.”

Christian Craig
Monster Energy Star Yamaha Racing 250 Team
“Tonight, was a dream come true. It’s something I’ve literally been daydreaming about during my drive to the track or on my way to the gym. This just shows that it pays off. I knew it would. I believed in the program that we have, in the bike that we have, and that if I put in the work and I believed in everything that this would come true. I always believed in myself but not to the extent that I do now. I’m just thankful for everything, all the ups and downs that I’ve been through. It does feel good to come out here and win and repay the team for just believing in me. It’s only round one. We’ve got a lot more rounds to go. Let’s keep this ball rolling.”

Colt Nichols
Monster Energy Star Yamaha Racing 250 Team
“I can’t really complain about a third place. I just have to get out of the gate a little better. I had really good speed but just struggled to pass some guys. The track was kind of one-lined and you were running into each other. So that made it difficult. It was literally a constant battle. At one point me and (Austin) Forkner were going at it really hard. Then he was able to get by RJ (Hampshire) pretty early and got a gap. I was kind of stuck battling RJ there for a little bit. Then Jett (Lawrence) caught up to me; it was just a freight train there for a minute. It made it pretty fun, honestly, but I would have loved to have just been out in front of that and get away from it.

“Overall, I’m happy being on the podium. Christian rode really well. He deserved it. He was the fastest guy all day. I’m hungry for a win. We’ll try again Tuesday to get off the gate a little better and hopefully win that one.”