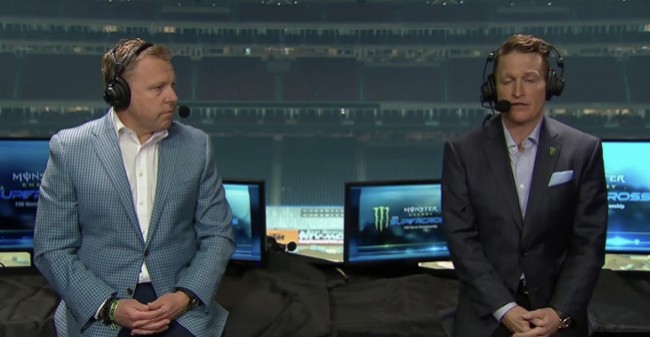 See what Ricky Carmichael had to say about Justin Barcia and Marvin Musquin’s impressive performances on Saturday night in the opening round of the supercross championship.

“I think a lot of it is upstairs, it’s in his mind, he has the confidence he can do it and not only that then being on the new team, in the press conference last week he was talking about how well he was gelling with the team, how predictable and comfortable he was on the bike. So he had that confidence on top of knowing he had that confidence on top of knowing he had a good shot to win the opening round. I have got to give it too him but the pressure he withstood from Ken Roczen, that is really hard position to be in when you have a guy right on our tail the whole race, it’s nerve wreck and you cant gap him? Thad’s a tough position to be in.”

“Musquin I expect him to be back even better next time we come here on Tuesday. We never really talked about him that much, he had a good qualifying practice but we didn’t really make mention of it, then he comes out and quietly gets third, positioned himself perfectly. He got good starts and for his first race back, being gone and side-lined for a year, it’s hard to come back and have that intensity level, so I expect him to be that much better. He will be able to sleep on that performance tonight, think about where those other guys where better that him and he has the ability to make that adjustment when he gets on the track come Tuesday.”

Find out RC’s thoughts on the 250 class contenders below: