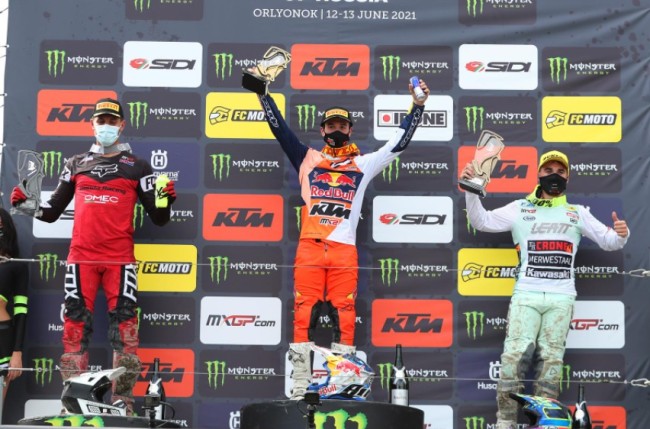 The Frenchman laid the benchmark already in timed practice as he claimed pole from teammate Roan van de Moosdijk by almost half a second in an F&H 1-2. He claimed top six starts in each GP moto but, despite significant track alterations since previous visits to the rapid hard-pack raceway, overtaking remained difficult throughout the day. Clever passes saw Mathys advance quickly to fourth but a slip on lap four cost him a place for four laps before he recovered the position with another smart move. Fifth out of turn one in moto two Mathys moved to fourth after a couple of laps; further advances were difficult on the ultra-fast raceway but the F&H rider worked decisively to build his speed through the turns for two stunning passes though the longest curving “straight“ with its varied combination of obstacles to take the chequered flag just two seconds shy of the winner. Second overall seemed secure but a switch of placings in his wake by a rider who had headed the Frenchman in race one reversed their overall standings on the final lap and he had to be satisfied with third.

Mathys Boisrame: “It was a good day with the fastest lap time this morning and then two decent starts. I made a few small mistakes but my speed was good both motos. The track was not easy so I’m happy to be on the first podium of the season; sometimes I’m a little bit too aggressive; I am working on that with Marc (de Reuver) and the team and today everyone was happy with the result. The team is like a second home for me; we have such a good connection and work in very good conditions to prepare a good season. Now we have two weeks to work again on our starts before the next GP at Matterley.”

Van de Moosdijk made the most of his good gate pick in race one to avoid the dramatic scenes at turn one by turning tight to emerge fourth and quickly convert that to third, a position he held to the chequered flag as he remained patient and concentrated throughout on a surface which would quickly penalise the unwary. Exiting turn one immediately behind teammate Boisrame in race two the Green machines moved forward in tandem until a few minor errors started to creep into the Dutch youngster’s riding and he sensibly settled for a secure fifth which would earn him fourth overall.

Roan van de Moosdijk: “Mathys and myself are used to being 1-2 in timed practice and that gave us the choice of the inside gates. It worked really well in race one as I could take the inside line in turn one to come out fourth and I was quickly third. The track wasn’t easy to make the difference; I tried to go for second but it’s a long season and in the end it was more sensible to settle for third. My second start was not quite so good but I made some good early passes; towards the end of the race I started to make some small mistakes and Mathys and Fernandez were pushing really hard so I decided it was wiser to settle for 4th. Now I look forward to Matterley; I’ve raced there since the 85s and always did well there so I look forward to continuing the good results.“

Mikkel Haarup, the third member of the F&H crew, is still rebuilding speed from a hefty crash earlier in the year and the twelfth choice of start gate which he earnt during the morning session denied him a good start in either moto. Nevertheless he knuckled down to the challenge, converting an initial nineteenth into thirteenth in race one before advancing from twenty-third to seventeenth in race two to earn fifteenth overall on the day.

Mikkel Haarup: “It was not too bad; I got points in both motos but I need to improve on that one quick lap during qualifying to earn a better gate. I didn’t get the starts from that, but from those starts I did get I did well to get into the points each time. Fifteenth overall is not the place I want to be, and not the place I know I can be, but I’m healthy and fit and I know as soon as I figure out the starts I’ll be in the top five. My preparation was going well until the crash at Mantova in the Spring but it takes time to get back into the rhythm. I missed a lot of the practices and I need to get some of that time back; you don’t get it back just like that. To come away with fifteenth overall at the first GP is better than what I could have hoped for right after the big crash. Now I’m pumped to get on with the season and soon be right up there with Mathys and Roan.“

Bike It MTX Kawasaki’s Wilson Todd was disputing fifteenth with the 2020 world number two during the early laps of race one until they collided and the Australian faced a long hard charge from nineteenth to regain sixteenth by the finish. He raced quickly from fifteenth to twelfth in race two before sacrificing two places in traffic during the closing stages. He heads to his “home GP”– team manager Steve Dixon is also the promoter of the British GP – fourteenth in the points standings.