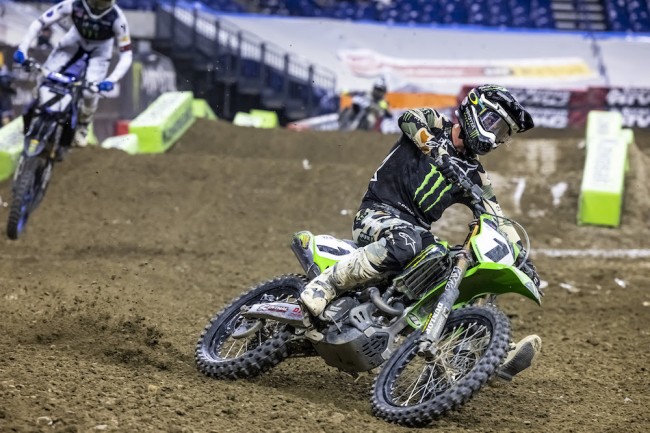 Round 5 of the Monster Energy® AMA Supercross, an FIM World Championship took place three days after the series moved to Indianapolis, where Monster Energy Kawasaki rider Eli Tomac earned his third podium of the season with a third-place finish, while teammate Adam Cianciarulo crossed the finish line in sixth. In the 250SX class, Monster Energy/Pro Circuit/Kawasaki rider Jo Shimoda raced his way from the back of the pack to finish in fourth place.

In the first 450SX heat race of the night, the No. 1 KX™450 of Tomac launched out the gate in second place and looked to make a pass for the lead during the opening lap before making a slight bobble. Still in a qualifying position, Tomac immediately tried to catch the lead riders but would ultimately settle in for fourth. As the gate dropped for the second 450SX heat race, Cianciarulo found himself in an intense battle with points leader Ken Roczen during the opening lap. Cianciarulo stayed in third place for most of the heat race before a mistake by a competitor allowed the No. 9 KX450 to capitalize and finish in second.

On the heels of a thrilling battle during the last round, Tomac was determined to take on the competition with the ultimate goal of closing in on the points lead. When the gate dropped on the 450SX Main Event, Cianciarulo led the charge for the Monster Energy Kawasaki duo with a fourth-place start, while Tomac sat in seventh after the opening lap. Both Cianciarulo and Tomac would make quick work and by Lap 4, the No. 9 had moved into third and the No. 1 had cut his way through the pack to sit behind his teammate in fourth. Cianciarulo held Tomac at bay for as long as he could, but a small mistake in the whoops would allow Tomac to close in on his teammate and make the pass for third with 11 minutes to go. Now sitting in third the No. 1 machine of Tomac quickly closed the gap to second, but couldn’t find the space to make a pass before time ran out and he finished the race in third. The No. 9 of Cianciarulo eventually settled into a pace during the main event, finishing in sixth place.

The third-place finish on Tuesday night is Tomac’s third podium of the season and 67th career 450SX podium, placing the reigning champion third in the 2021 450SX championship point standings, while teammate Cianciarulo sits in fifth overall.

Eli Tomac: “I felt good all day aboard my KX450. After setting the fastest time in the first qualifying session, I didn’t have to change much on the bike. I had a small mistake in my heat race while pushing for the lead but still managed to put in some solid laps and finish in fourth. In the main event, I got stuck behind a group of riders on the opening laps and knew I had to quickly cut my way through the field because I could see Ken (Roczen) was pulling away. I put my head down and started charging and made it up to fourth behind Adam (Cianciarulo) before the half-way mark. After getting past Adam, I could see second place and I eventually ran out of time before I could make a pass stick. I feel like I rode well tonight and, with a better start, could have challenged for the win.”

Adam Cianciarulo: “I feel like I was struggling to find a flow out there tonight. The track was challenging, and I made far too many little mistakes. Sixth place isn’t something I’m normally pleased with, but mentally I kept it together out there, even after the mistakes, and I’m proud of that. It’s a long season and there’s still much to improve on. I can’t wait to get back out there on Saturday.”

In the 250SX Eastern Regional class, Monster Energy/Pro Circuit/Kawasaki rider Jo Shimoda started the day with another consistent showing in practice, to qualify in fifth and set himself up for a solid gate pick in his heat race.

In the second 250SX heat race, Shimoda found himself in the top-5 after Turn 1 and immediately began pushing for fourth. Unfortunately, Shimoda would go down in an attempt to take over the position. Getting back going in 13th place, Shimoda went to work right away on the field in front of him, putting in consistent lap after lap to move up to third place.

Once the gate dropped on the 250SX Main Event, Shimoda was involved in a first turn pile-up that left him in last place to start Lap 1. Never one to give up, the No.30 KX™250 machine of Shimoda did what he does best, put his head down and rode at a consistent pace, working his way up into the top-10 after just a few laps. As the main event progressed, Shimoda continued pushing his KX250 through the pack, and 10 minutes in, he had advanced up into fourth place, where he would ultimately finish the race.

Jo Shimoda: “I had a solid start to my day, qualifying in fifth on my KX250, but mistakes in both the heat race and main made my night a rough one. I ended up running into other riders to start the main and was involved in a first turn pile-up that left me in last place. The good news is I was able to charge hard and rebound for a fourth place finish. I am already looking forward to Saturday and improving on this result.”