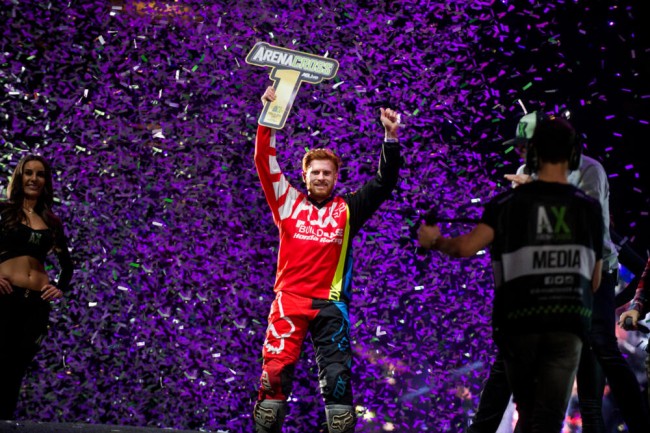 The hugely popular Arenacross Tour, which has successfully managed to mesh a competitive indoor motocross racing championship with ballistic Freestyle entertainment, has joined forces with the ACU.

Running under the auspices of the ACU, the UK’s leading sport’s governing body, means the hugely-popular Arenacross series will have full British Championship status. All classes will be British Championship ranked, thus giving a significant boost and sense of importance to individual competitors, teams, sponsors, and associated partners.

What’s more, Arenacross will be an all-British affair next year with youngsters from the age of seven-years on electric bikes getting in on the act, through the classes of 65cc, big and small-wheel 85cc, Futures/Rookies and Pro 250/450 and the Freestyle Motocross gang all originating from the UK.

Talking about the ACU’s involvement with the 2023 Arenacross series, Steve McCauley the ACU’s Motocross Chairman said; “We are absolutely delighted to have Matt and his awesome team onboard with the ACU for 2023 and beyond. The Arenacross series has always been the pinnacle of indoor MX within the UK and to now have it running under the ACU as its permitting Governing body really does show the commitment from both parties to get this agreement in place quickly.

“We all know that when it comes to promotion and organisation Matt and his team really know how to deliver.

“We had no hesitation in granting the series the Official ACU British Arenacross title as we know it will reflect the standards worthy of such a title. I am excited and delighted to have been a part of this and look forward to the first event.”

Embracing the positive impact for the series, Arenacross promoter Matt Bates added; “The last week has been a refreshing change in how the sport’s governing body have embraced what is already a very successful championship – and I can’t thank the ACU Motocross committee enough for how quickly they’ve worked to make this a reality. As we move towards our tenth year of Arenacross, I can’t think of a better way to celebrate than by crowning British Champions across every class at the championship’s finale in London next February.”

Pictured: Adam Chatfield was the first-ever, and only, British Arenacross Champion when he won the series in 2013. Fast forward 10 years, and the 2023 edition will be an all-British affair, guaranteed to produce British Champions.