Anstie on Supercross: We are learning and making progress each time 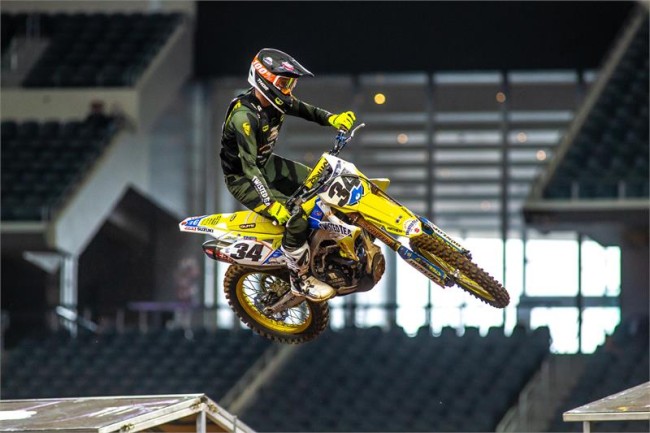 Suzuki’s Max Anstie kicked off three back-to-back races of the Monster Energy/ AMA World Supercross Championship in Texas at the weekend at AT&T Stadium in Arlington on Saturday, scoring more points in only his third SX race.

The Twisted Tea/ H.E.P. Motorsports/ Suzuki rider had a strong night and stepped up another position in the points, while teammate Brandon Hartranft notched another event in his rookie season aboard his Suzuki RM-Z450.

Anstie and his RM-Z450 are getting faster and more comfortable after his comeback from pre-season injury: After tight battling in heat two, he earned a direct transfer to the main event. An outside gate on the rutted starting straight put him in a tough position, but he raced forward and gained a few positions on the opening lap, earning enough points to advance him up one position in the title standings.

Said British rider Anstie: “My third 450 Supercross in the books! I’m happy that I got my laps in. We are learning and making progress each time. I’m looking forward to Tuesday.”

Hartranft was flowing with his Suzuki, posting the fastest lap time in both of his qualifying sessions. He carried that momentum to the starting gate of heat one where he pulled a good start and ran in fifth for the first lap. After some battles on the tight Texas track, Hartranft missed a direct transfer by only one position. In the LCQ, a top-three start at the holeshot line was undone when he and another rider made contact in the first rhythm section; not resulting in a crash, but in losing positions early that he was unable to regain places in the short race despite his great speed.

Said Hartranft: “From the first lap I laid my wheels on the track I felt great. In my heat race, I had a great start and I was dicing-it-out with the guys [in a direct transfer position] then Kenny crashed and held me up and the riders behind me attacked. I really liked tonight’s track. The ruts were pretty gnarly, but hopefully the track’s like this on Tuesday.”

Crew Chief Clark Jones added: “The track was good, the dirt was slippery in spots, but had good traction in other areas. It didn’t break down as much as we thought it would. Brandon liked it and so did Max. It was a little tighter than what Max has ridden; this is only his third ever Supercross in the 450 class. The riders did well, we were hoping for better results, but we’ve got Tuesday coming up pretty quick.”

The series continues in Texas for two more rounds. Arlington 2 drops the gate on Tuesday night, with the final Texas round of 2021 taking place on Saturday.