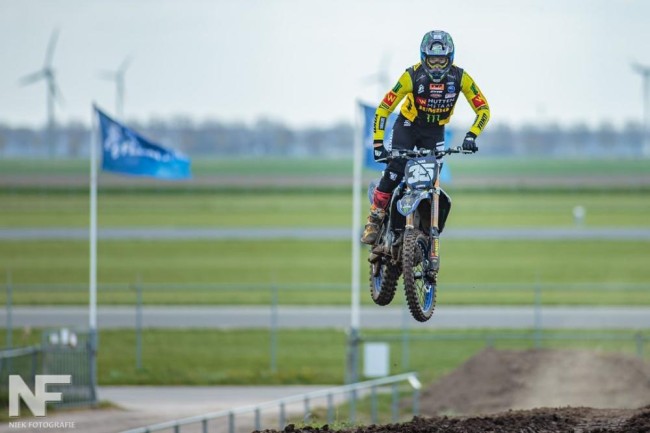 EMX125 Champion from last year, Andrea Bonacorsi has a new challenge this year as he made the move up to the 250cc to contest the EMX250 series after inking a deal with the Hutten Metaal Yamaha team. Bonacorsi has already contested a few races in Italy and Sweden to prepare for the EMX250 series which kicks off at the end of the month at Matterley Basin and he’s decided to contest the British Championship at Canada Heights this weekend.

“We decided to race at the British championship to have another good pre-season race. I don’t have any expectations, I am just trying to enjoy every lap and of course try to give the best every time on the track”, Bonacorsi told GateDrop.com.

Moving up to the 250cc isn’t always an easy adjustment but Bonacorsi looks to be built perfectly for the MX2 machine and says he is loving the bike and his new team. The races he has done so far he’s impressed as he’s been running with MX2 GP riders which is always a positive sign.

“With the Yamaha 250cc I have a really good feeling, the bike is awesome. The pre season races and training are going really good for me. I’m improving and learning a lot every day on the track. I would like to thank Yamaha and all my team for the amazing job that they are doing and to let me live one of my dreams”, concluded Bonacorsi.

British fans should get a treat this weekend as there’s no reason why the Italian can’t run at the sharp end of the British MX2 pack as long as he can learn the track quickly.

As for the season ahead, the EMX250 is incredibly stacked with lots of young talent but Bonacorsi is in that bracket and even though it’s his rookie year he can produce some good results towards the front of the field.