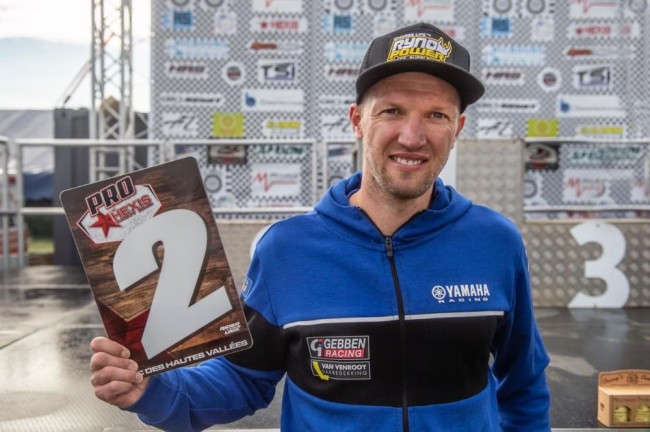 The Gebben Van Venrooy Yamaha Racing team got back underway to racing at the weekend as they contested the Crisolles International race in France. It ended up being a good day for the team in the slick hard pack conditions.

Experienced Belgian talent, Kevin Strijbos showcased his skills on the slick track on his Gebben Van Venrooy Yamaha debut. In race one he was leading before a back marker got in his way which let Seewer make a move for the lead but Strijbos tried everything to retake the lead again. In the end he had to be content with second finishing right on the rear wheel of Seewer.

Unfortunately, both Calvin Vlaanderen and Brent van Doninck collided with each other in the opening race making it difficult at a track that was hard to overtake. Vlaanderen would charge his way through to seventh with Van Doninck bringing home a top ten result.

In the second moto, Strijbos didn’t get a good start but despite it being a hard track to pass on he didn’t have such problems coming from outside the top ten, making plenty of passes to come home in an impressive second. It was a very good Gebben Van Venrooy Yamaha debut for the Belgian and it’ll certainly give him confidence heading into the MXGP season.

Vlaanderen was looking strong right on Seewer’s rear wheel for the majority of the race as they battled for the race win but a small crash with a handful of laps to go saw him dropping back to third. It was a similar story for van Doninck who was strong in fourth before a crash demoted him to seventh but the speed of all three riders is encouraging heading into World Championship action next month.

Kevin Strijbos (2nd overall): It was a good day, it was my first race since Valkenswaard last year. I had a good feeling with second overall so it’s a good start for myself as well as the team, we worked quite hard and are still working hard on the engine. I think it can only get better for the future, it’s not 100% yet, we still need to work but before Russia hopefully we can get close to 100%. Everybody is happy with how the bike is so I am looking forward to going to Russia.

Calvin Vlaanderen (4th overall): I’m happy to get the first race jitters out the way. I was quite nervous to be honest just with not having raced in a while. In the first race I struggled off the start and went down twice coming through the field. The second moto I got a good start and rode in second the whole race before tipping over with a few corners to go. I am looking forward to working on a couple things in the next couple of weeks and getting stronger for to the first MXGP round.

Brent van Doninck (8th overall): I felt like my speed was good but unfortunately I went down in both moto’s. In the first moto I crashed together with Calvin and hurt my hand a little bit. I was doing well in the second moto in a strong fourth before crashing again but this time on my own. The track was really sketchy and quite hard to pass.