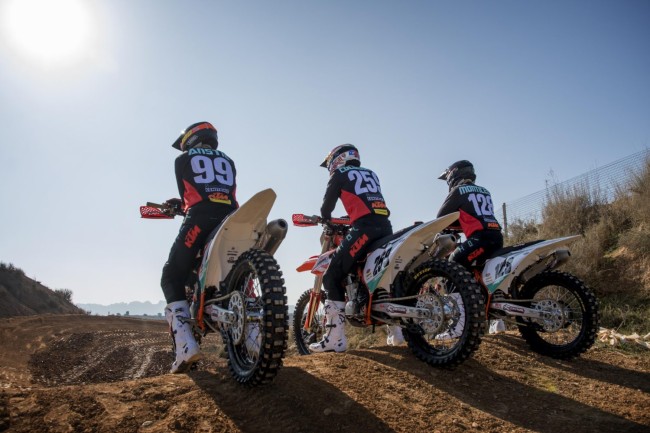 In part one of our interview with Tim Mathys we talked a bit about his construction business and his year out of MXGP. However, in part two we focused more on 2019 and his impressive team of three riders.

Mathys is one of few MXGP teams to have three MXGP riders under the awning and he admits himself that last year he didn’t want to run three but when the opportunity came to sign Max Anstie he couldn’t refuse.

Gatedrop: I’ve spoken to you in the past before about running three riders in MXGP and you weren’t keen on the idea but you have three this year! Was it a hard decision to make because I know it takes a lot of effort to run three riders?

Tim Mathys: You know, I knew this question would come one day from somebody. You’re the first one to ask and you’re absolutely right. Even at the middle of last season, I said that I didn’t want three riders, that I just wanted to focus on two. But I will tell you how it went.

I was already interested in Max (Anstie) since his MX2 days but it didn’t work out as he went to Jacky (Martens) and Husqvarna. At the beginning of last year I heard that Max was out of contract at Iceone. I spoke with his entourage, I tried three times, and every time they started talking about other riders. I just felt that they (Max’ entourage and at that time I thought also Max), weren’t interested in our team.

Then later in the season, in September, I was listening to a podcast from your colleagues.

They spoke about Max, that he still didn’t have a ride and things weren’t looking good for him.

I was thinking, how is this possible? What is happening with the sport I love? A guy like Max, he had two podiums last year, he won the Nations less than a year before, I was thinking, what is happening? I just couldn’t let this happen. I started thinking, why aren’t they interested in my team, what can be the reason… I decided to send a message directly to Max and what I discovered then was that Max didn’t even knew we were interested in him.

From there on it all started and to be honest until then I still had the focus on two riders but I was just so embarrassed for the sport that a rider like Max wouldn’t have a good ride. Literally in ten minutes I decided that I could not let that happen. I started speaking to Max and he said “for sure, I am absolutely interested in your team, I didn’t know you guys were interested in me”.

The first thing I did was contacting KTM but I was pretty sure they would support the idea as they spoke me already before about him. I contacted all the other sponsors too and they were all enthusiastic about Max. That’s how we went from two to three riders. I knew that I would need a lot more money because a third rider costs a lot of money. I needed some extra mechanics, an extra van, sending extra transport to each GP, the extra overseas races cost, Max’ salary and so on. I made the calculation, found some extra sponsors, did a big extra effort from Standing Construct as Max has a big publicity value etc…and managed to close the budget. The only thing that I discovered very recently is that Youthstream apparently aren’t too keen about the three rider team. Having a three rider team means having the need for minimum 1/3 extra sponsors which you have to give something back. Unfortunately I am not given the possibilities to do that although it would be very logic. I have to say that I am disappointed in that because last year for example in Indonesia, I was a little bit embarrassed for the sport of Motocross that the gate was only half full.  Now we field a three rider team, doing all the GP’s, also the overseas GP’s, professionally, which means a professional and complete setup, taking two bikes a rider, enough material etc… in short: the way I think as a team you have to be in the World Championship. I am now in a situation that I can’t satisfy my so much needed sponsors so I will have to think towards next year what to do.

Gatedrop: Just based on what you said I’ve got two questions. What’s your relationship like with Anstie, I guess it’s pretty good because he appreciates what you did for him so he could get a ride? Also, Jeremy Van Horebeek almost didn’t get a ride which is quite embarrassing for the sport as well, did you ever talk to him about coming to your team?

Tim Mathys: First of all what concerns Max, he’s a great guy. You know before I didn’t have too much contact with him but with the contact I had with him while waiting at an airport or being at the same hotel, etc… I already discovered that he was a nice guy. Now that we are working with him more than half a year that only has been confirmed. He’s really a good guy and shows a lot of respect. He works hard, looks always first at himself before complaining, respects what people are doing for him and so on. I think he’s an example for many other guys.

What concerns Van Horebeek, just before Glenn (Coldenhoff) signed in Indonesia, I had a meeting with Jeremy. I told him that I was interested in him and he was also interested in our team. Without mentioning details, I think if I had spoken to Jeremy a few months later, he would probably have been riding in our team. I spoke with him literally four days after he heard from Yamaha that it was finished. His wishes were way different than then what I think his wishes were a few months later. It could have been nice having him as a Belgian rider in our Belgian team, it’s a pity.

Tim Mathys: What concerns Ivo, maybe that’s a little bit my MX2 idea, that I want to bring into MXGP.  I saw what he did in Saint Jean d’Angely were he was riding on not such a competitive bike. He rode into sixth place and passed guys like Seewer and others. He did that again in Loket. He showed me that he had the speed. I know all the blah, blah, blah that was going on but I can only answer one thing and that’s that this time in the sport 8 on10 riders have a personal sponsor. It’s the same with Ivo but it’s also the same with guys that are in the top five in the World Championship.

We just believe in Ivo, I think he already showed by winning the superfinal at Hawkstone Park in the sand that the fact we believe in him makes sense. Also, in Matterley Basin and Valkenswaard he showed what he’s able to. He passed top guys, former World Champions, and finished top ten. And this weekend in Arco he proved that he was just missing some things in the past which we gave him, just like we did in the past with Coldenhoff, Guillod, Lieber, etc…

When we start with a rider we ask them what they think they were missing before, and that’s what we give them. I think the evidence is there that Ivo has a lot in him and we will give him the time to show that. He lives now in Belgium and that’s also proof that he really wants to make some progression. Where he lives in Italy is like heaven on earth and now he’s living in Belgium. In the rain and cold. He practiced all the winter in the sand.

I believe in him and I think he will amaze a lot of people.

Gatedrop: I believe after Pourcel left him as coach, there was a chance he was going to work with someone else. Is that likely to happen?

Tim Mathys: At that time, we were talking with someone but it didn’t work out. I think now the guys feel good, that’s maybe the advantage of having a three rider team. When they practice together, every time it’s like a competition. Glenn and Max are more or less the same level and Ivo is, or I have to say “was” (laughs) trying to catch them up. We already discovered in winter in the Italian style tracks in Spain he has the speed of Max. Maybe when we get a good opportunity to work again with a coach like Yves Demaria for example then we will. There aren’t too many good coaches in the paddock.

Gatedrop: I have to ask you about Glenn, obviously at the Motocross Des Nations last year he wasn’t riding for your team but he’d already signed. You must have been thinking, what a signing you’d pulled off! It’s a shame about the crash he had in winter, how was he looking up until that moment?

Tim Mathys: You know at the Nations, he amazed everyone including me, including himself I think (laughs).  After the Nations he continued working very hard for the Red Bull Knock Out which he should have won. Due to circumstances in the race he didn’t win but it is what it is. With all my respect to the guy that officially won by the way. After that event he took a few weeks off and then he started riding again. In the beginning for sure he needed to gain a little of speed but when the crash happened, he was getting to his former level.

Unfortunately, the crash happened because of something that happened which wasn’t Glenn’s fault, it is what it is.  It was a very bad injury but luckily it wasn’t too bad and now step by step, he’s getting back to his former level. We will give him all the time, that’s the advantage of working with Glenn. He’s a rider that always gives it 100%, he lives for it like an athlete so you don’t have to wonder or ask questions if he’s training enough or something like that. We just know he’s doing everything he can and we’ll give him the time. I’m pretty sure that after the five weeks break, maybe he’ll not be back to his best form, but close to it.

Gatedrop: Just on 2020, how many of your current riders have contracts and the fact Youthstream aren’t happy with three riders, will that throw a spanner in the works for you?

Tim Mathys: Glenn is the only one that has a two year contract.

I feel now that the working of the team, the crew, mechanics, infrastructure, etc…  could continue with three riders. Only the fact with what I’ve experienced with Youthstream, I think it will be difficult to do that. I’m afraid that I will have to go back to two riders which in my opinion is a pity for the sport because I think that Motocross needs people and teams that gives the riders all they need and teams that work in a professional way, not only at the GP’s next to their door, but also further away. A World Championship where only ½ of the field is present at 1/4th of the races is not good for the sport. I think that teams who want to do efforts to avoid this need some respect, even if it are semi-private teams, we all saw two years ago that you can’t take the participation of the manufacturers factory teams for granted.