Interview: Mike Gwerder – I want to be in the top three 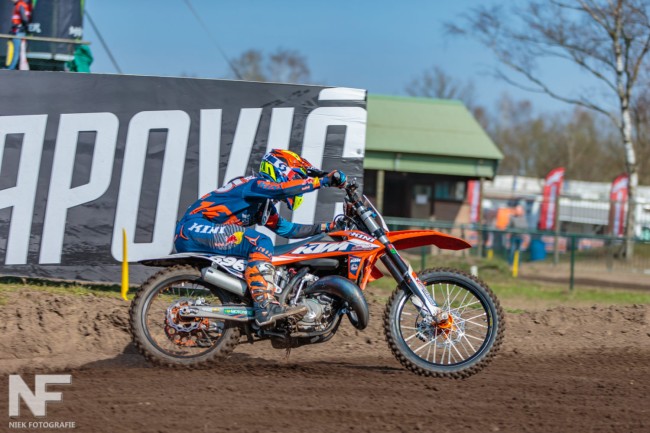 A few years ago young Swiss rider, Mike Gwerder was contesting the EMX125 championship and found it tough to even qualify. Just a few years later and he’s really starting to improve as a rider.

After two rounds of the series this year, Gwerder sits an impressive sixth in the standings but isn’t even 100% fit after a crash in Valkenswaard hurting his leg.

It’s nice to see riders improve and Gwerder has clearly worked hard to make a big jump during the past few years.

Being from Switzerland he might just be their next big thing after the likes of Arnaud Tonus, Valentin Guillod and Jeremy Seewer.

We caught up with Gwerder to discuss his season so far.

Gatedrop: Mike, you’ve had a strong start to the EMX125 season sitting sixth in the standings. You must be happy with how the first two rounds went for you?

Mike Gwerder: So far I’m not happy, but I can be satisfied with these circumstances, but I know that more is possible.

Gatedrop: I believe you hurt your leg during practice at Valkenswaard, just how much did that affect you in the races?

Mike Gwerder: Yes, in Valkenswaard I had a violent crash during qualifying. I got myself a violent bruise on my foot. I feel it now, it will hurt for at least two weeks. The races really hurt, I was not able to deliver my full performance.

Gatedrop: Being from Switzerland, is it tough always travelling back home to and from the races?

Mike Gwerder: Me and my dad can handle that well. We are always on the road or by bus. Switzerland is also in the middle of Europe, so we are very flexible.

Gatedrop: I guess you’re still at school too – what’s it like dealing with school and fitting in the work for motocross?

Mike Gwerder: I finished school last summer. Now I’m doing an internship as an electrical contractor and by the way another self-paced school.

Gatedrop: Coming into the season what were your expectations for the season?

Mike Gwerder: My goal is to get into the top 3 in the EMX, the expectations are quite big but everything is possible.

Gatedrop: What’s Motocross back like in Switzerland? In Ireland it’s pretty small, is it similar over there?

Mike Gwerder: In Switzerland it is just as small as in Ireland, you can see we don’t have many international Swiss riders.

Gatedrop: Seeing riders like Tonus, Seewer and Guillod being successful in GP’s must give you a lot of motivation for the future to be the next big Swiss rider in the GP’s?

Mike Gwerder: Yes, the motivation is very big, not much Swiss riders has made it as far as me, and of course that is very motivating. But it is still very long and a further road to the GP’s. I will give everything that I make the jump up to the GP’s.

Gatedrop: I believe you work with Didi Lacher as he’s your coach and Rene Hofer also works with him. What’s it like working closely with those guys?

Gatedrop: What sort of goals have you set yourself for the rest of the season as well as long term goals?

Mike Gwerder: My goals for the rest of the season are still to be in the top three. I think I have a good chance when I’m 100% fit again.

Gatedrop: I believe this will be your last year on a 125cc before you make the jump to the 250cc, are you looking forward to that?

Mike Gwerder: Yes, this is my last year on the 125cc. I am also looking forward to the change, I think it will be more difficult but I’m really happy. I have been training a few times on the 250cc and it was so great.