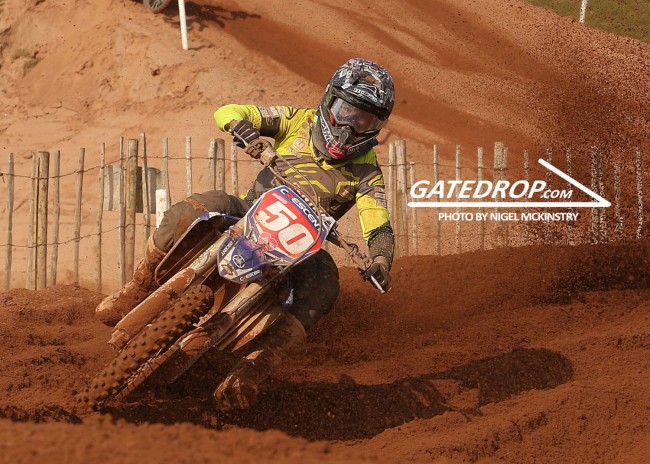 Martin Barr had two days of tough racing at Hawkstone Park and then Desertmartin over the weekend but the Ulsterman made all the effort worthwhile by winning five out of his five motos as he really starts to hit form coming into the meat of the season on his Crescent Yamaha.

Barr battled Josh Gilbert for the win at Hawkstone then the leading Irish 450 riders, Meara and Mackrel, at Desertmartin in what wasn’t an easy two days on two rough sand tracks in the heat.

But Barr got the job done both days and we caught up with him to get his take on his form heading into round three of the British championship at Canada Heights.

Undefeated in two days, you must be pleased with how it’s all went, but it looked pretty brutal out there today!

It’s been a really good weekend, five wins from five. The MX Nationals yesterday was fantastic at Hawkstone, I’m just starting to feel back to my old self. The last couple of weeks haven’t been up to scratch really but no excuses, we’ve kept at.

Today was pretty tough, we didn’t get home to half 2 this morning after a day’s riding in serious heat yesterday. But today, if it was a normal race we could have pushed more if we needed too but I just used my head.

Race one I got a decent start and followed Mackrel for a while and then made the move. Race two I got into the lead quicker but I was really tired and made a couple of mistakes so I just slowed up and let those boys by then I put a charge on towards the end again and got to the front and stretched it out. Race three another decent start and just used my head and got into the lead and just done what I had to do to get the win.

The track was absolutely fantastic, the difference from the last time I rode here at the British championship with all the new sand they put on, it makes the track so much better, so many more lines, it’s a lot rougher.

That second moto Mackrel went down the inside of you and you let up but then Meara was right beside you going for the pass too! Did you know he was there? It looked like after that you figured out some lines and got going again?

Yeah I knew they were there, I had a quick look around the back and I didn’t break them so I just let up and let them go. I just followed them for a lap or two and took a deep breath, I’ve been loaded with the cold, cleared my system and just put a bit of a push on the last three or four laps and got back into the lead and stretched it out enough to get the win again.

I wasn’t overly stressed, those guys are riding really good and with the new sand on the track so I’m having to really work the 250 and be precise, get my gears perfect, the lines perfect, so it’s a fantastic work-out for me.

Coming here I never dreamt it was going to be easy, these guys on home turf are fantastic riders. Both Mearas, Stuart Nesbitt, Paul Atkinson, Glenn McCormick, Dicky Bird, them guys have rode three days on the bounce and fair play to Jason, he was still going there at the end.

So it’s been a brilliant day and a brilliant weekend for me, I’m really happy to start feeling back to my old self. I’m looking forward to a couple of days of rest for my body and to try and get rid of this cold, then look forward to Canada Heights for the next round of the British championship.

At Hawkstone you were battling with Josh Gilbert who has shown good speed at the first two British rounds so it wasn’t like you had no competition there, so it proves the pace your are on!

Yeah, especially in the first one. I’d made an okay start but in the first turn I was banging bars with a few people and lost some positions, he was maybe ten or twelve seconds up the road on me and I closed him down within two laps and just used my head, followed him for a couple of laps, put him under pressure and he went down. So yeah I was really happy.

Race two was something similar. I took a bit of a breather in the middle and he got by me, then as soon as he passed me he went head over crap again and had a pretty big crash. I felt pretty comfortable. If I didn’t have this cold things would be a lot easier , I’m just getting blocked up and not being able to breath but it is what it is, no excuses.

I’m enjoying my racing and the Crescent Yamaha is working fantastic. What my dad has done to my engine for such a small team and lack of budget is amazing. Against the guys I’m racing and even against he 450s out there today, my starts were really good, so I’m happy and we will just keep pushing forward and try to close that gap down in the British championship.

And on Lyng, it looks like the starts are crucial with all the top six being a similar speed, it seems you need get away with them to be able to race with them.

Definitely, I just got too much wheel spin and then got an elbow in front of me and the rest is history. There were guys getting good starts who are maybe not running the pace and with the way Lyng is now, it’s very one-lined, so if you get off the main line you just spin out. It proved very difficult to pass people and by the time I did make the passed the front group had gone even though I was able to close them in I just ran out of time.

I would have been a lot more frustrated if my times had been off and I wasn’t riding good but it was just bad starts. My pace was there and I knew if I got good starts I would run with them no problem but we will address it, we have been working on it and I’m looking forward to Canada Heights.