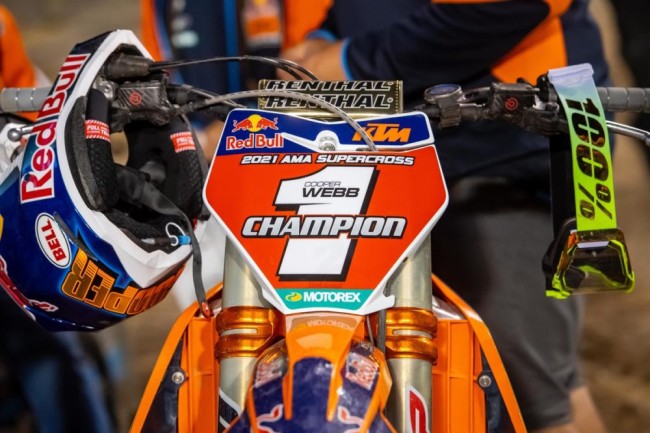 The 76 year old Belgian directs the operation managed by Ian Harrison and fields Webb, Marvin Musquin and promising youngster Max Vohland on the KTM 250 SX-F. De Costermoved to KTM in 2011 and helped bring the factory their first supercross wins and championships thanks to his relationship with Ryan Dungey and development work with the likes ofKen Roczen and Webb.

“The feeling of winning never gets old, and when you don’t [win] it feels like the end of the world. I like to see my guys on the podium,” he said at a Red Bull KTM press conference prior to the opening round of the 2021 AMA Pro Motocross Championship in California. “It’s now 5 out of 7 for us. When you think of a company like Honda; it’s been twenty years since they won a championship and they work hard also.”

“You almost feel relieved, and thankful,” he added.

De Coster was able to collaborate with a fully fit Webb to tremendous effect. The 25 year old won eight Main Events and took another five supercross podiums from seventeen fixtures to earn the #1 plate for the second time this spring. “He got lucky again,” De Coster joked. “He’s very special. One big difference with the other riders is that he looks at himself as much as the rest. He doesn’t make excuses and he’s mentally strong.”

Although he had to deal with injury, Musquin was also able to contribute five podiums finishes on the way to 9th in the standings. “Sometimes he tries way to hard, too much,” De Coster earnestly assessed of his French KTM stalwart. “He wants to do so well that sometimes it handicaps him a little bit. When he can ride free he is really awesome.”

Harrison, for his part, insists that it’s the team’s work ethic across the board that has led to so many spoils ‘indoors’; a trait they need to take into the motocross series and then hope for good fortune against the injury woes that cast Webb out of the running in 2019 and 2020. “You don’t luck into things like this,” the South African said of the ’21 SX crown. “It’s everyone doing their job to the best of their ability.”