Wilson on not qualifying and Anderson on being stuck in third gear! 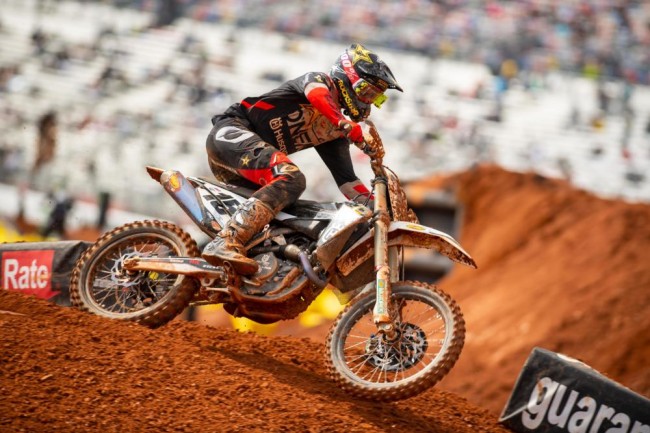 Following two weeks off from racing, the Rockstar Energy Husqvarna Factory Racing Team returned to the AMA Supercross World Championship paddock on Saturday for the first of three rounds taking place inside Georgia’s Atlanta Motor Speedway this week. Despite a chaotic start to the day with inclement weather conditions, Jason Anderson rose to the occasion as the fastest 450SX qualifier and heat-race winner before concluding the night just off the podium with a positive finish in fourth.

He lined up in 450SX Heat 2 where he got off to a sixth-place start. He quickly charged into third on the opening lap and he made his move into second with one lap to go. Keeping the momentum rolling on the final lap, Anderson overtook the lead just before the checkers to claim his third heat-race of the season. In the Main Event, Anderson got tangled up in the first corner and started just outside the top-10 but he charged early on to bring himself into seventh by lap two. He continued to fight despite losing his shifter earlier in the race and he found himself just outside the podium battle heading into the final laps. He finished strong at the end to claim his second-best finish of the season with fourth. “Atlanta one was a good day for the most part,”

Anderson said. “I qualified P1 in practice and went into the heat race and got first. In the Main Event, I got a little tangled up in the first corner and ripped my shifter off but I was able to get into third, manage my race and still get fourth so it was pretty good.”

It was a tough ending to the night for Dean Wilson, who started off on a positive note with a fifth-place qualifying position in the 450SX division. In 450SX Heat 2, Wilson got a 10th place start and he experienced vision issues that made it difficult to make passes in the muddy conditions. Ultimately finishing 11th, Wilson lined up for the LCQ, where he found himself in 14th off the start. After a series of crashes throughout the race, Wilson ultimately missed the Main Event by two positions. “The day started off good, I qualified fifth and I really liked the track and felt good on it,”

Wilson said. “First heat, I ran out of tear offs and I was really struggling with finishing because I couldn’t see. I put myself in a bad position for the LCQ and then I came together with another rider, went down, got up, went down again and that was it really. It’s a big disappointment but all I can do is come back on Tuesday fired up and ready to do well.”

Track conditions were slick and muddy as the 250SX divisions kicked off the heat races and team riders Stilez Robertson and Jalek Swoll were right in the mix of the chaos in Heat 1. Swoll got off to a good start in the heat and he quickly moved into second after two riders went down in front of him. However, Swoll soon fell victim to the unfavorable conditions when he slid out going up the face of a jump. He re-mounted and charged his way up to a sixth-place transfer. In the Main Event, Swoll got pinched off on the start and began in 11th on the opening lap. He moved into 10th for the first couple laps before making a late-race charge to secure two more spots for eighth.

“It was survival out there today with the muddy and tough conditions,” Swoll said. “The heat race was going decent but then I went down and it left me with a not-so-great gate pick for the Main Event and I got pinched off in the start. We’ll be back for the next Atlanta round and try to land on the box.”

Stilez Robertson returned to racing in Atlanta after missing the last two races due to a foot injury. In 250 SX Heat 1, he got off to a great second-place start but due to the muddy conditions he tangled with another rider and went down shortly after the start. Rounding the opening lap in 12th, Robertson climbed up to ninth right away and ultimately salvaged a seventh-place transfer. In the Main Event, Robertson didn’t have the best start as he came together with another rider in the second corner and went down once again. Beginning well outside the top-15 on lap one, Robertson had his work cut out for him as he battled through the entire nine-lap race to ultimately finish 11th on the night.

“The day started off pretty good with qualifying and the heat race got off to a pretty good start but then I ended up going down in the mud,” Robertson said. “With 14th gate pick, I messed my start up in the main and in the second turn I ran into someone and went down. I think I started 18th and finished 11th, which isn’t great by me but we’ve got another one on Tuesday and I can try and redeem myself.”