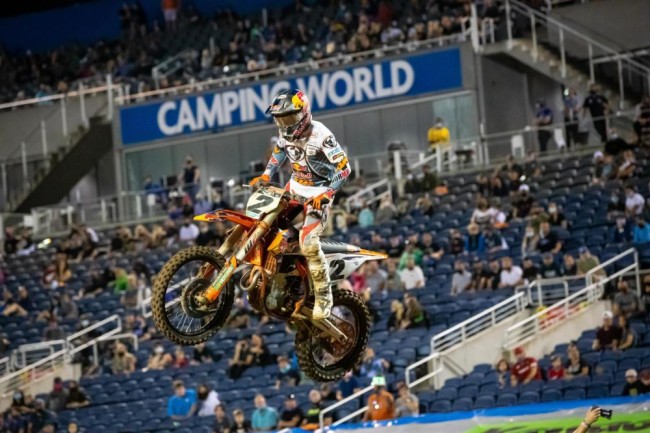 Cooper Webb: He made it happen! When his back is against the wall Cooper Webb usually delivers and he did it again in Orlando. If Webb got second to Roczen again he would have been 19 points down and facing an uphill task to win his second championship. This was a six pointer and Webb with his opportunistic nature made a brilliant two for one pass take overtake Roczen and Brayton in a corner to take the lead.

From there it was a head-to-head battle with title rival Roczen and Webb, while admitting he found leading that long difficult, didn’t crumble and got the job done. Now the gap is 13 points with ten to go and the championship fight is very much on for the gritty American. This was a race that encapsulated Webb’s character and fighting spirit and was a vital win to stop Roczen’s race-winning momentum.

Webb commented: “It was a great race tonight, we were one and two for pretty much the whole thing, tooth and nail. It was a tough race, the track really broke down a lot, especially from the beginning laps and it’s definitely a little different when you are leading the majority of the Main Event. I made a few mistakes those last few and Kenny caught up, but I was able to get it done and man does it feel good.”

Zach Osborne: It has been a strange, tough season so far for Zach Osborne who has been riding well but not getting the results that his speed suggests he should! At Orlando however Osborne finally got on the podium after a good start paid dividends. Osborne holeshot but quickly got shuffled back to fourth with the intensity of the first lap, Osborne however impressively re-gained his composure and tagged unto the back of Justin Barcia and when Barcia made a mistake, Osborne took advantage and refused to relinquish the coveted third place his riding probably deserved before round seven!

“It feels so good to get back on the podium and kind of find some mojo tonight,” Osborne said. “It felt good to get a start, that’s where I have really been struggling. It felt so good to get out there out front, getting in some clean air and breathe a little bit. I am super grateful to be up here.”

Jason Anderson: Somehow Jason Anderson has been fast after dislocating his thumb than before it! The American put in a great ride last weekend for sixth and looked to be on for a similar performance in Florida running sixth with Tomac in his sights until he dropped it near the end after an incident with a lapped rider. All this with Anderson admitting he isn’t able to use his front brake properly yet thanks to his injury!

It is an impressive rebound so far for Anderson and if he gets a start, could well be a podium threat once he is fully healthy and can use his front brake! It’s nice to see the former champ come back into form because Anderson is always fun to watch when he’s on it.

“It was an improvement all around for me today,” Anderson said. “My practices were better and my racing was quite a bit better, so If I could get a start it would help my results. In the Main Event, I got up there after a not-so-good start and got behind Tomac in sixth but I came together with someone, it was more my fault than anything, and dropped back but we’ll move on to next week and keep progressing.”

Jett Lawrence: You can’t keep a good man down. After crashes and injury since his last win, Jett Lawrence once again showed his mental strength and also his determination to perform to a high level despite a shoulder that is still not 100%.

Lawrence got a much needed holeshot and took advantage of some clear track to beat the championship leader, Colt Nichols, straight up in a very impressive performance in the context of the rollercoaster few weeks he had been one.

With a few weeks off and some time to heal, Lawrence can also get a head start on some outdoor testing in which he will be expecting to be a title threat after his win at the end of last season, and he can then come into the final two rounds for the supercross series at the end of April full of confidence and the chance to put a marker down as the man to beat for 2019.

“Today was a smooth day,” commented Lawrence. “I felt like I rode very smart and made smart decisions in qualifying and was P3 in both sessions. I felt like I was smarter with my thinking process. Going into the heat race, I didn’t get a very good start; I popped the clutch a little, which made me wheelie out, but I was able to manage the first turn and get further up in the pack. With [Christian] Craig going down, I ended up winning that, so got pretty lucky. In the main event, I executed my start very well and was able to manage the race to the checkered flag. Colt [Nichols] was on me, which was good to have the pressure there, keeping me on it. I’d like to thank the team, my mechanic Christian [Ducharme], and my trainer Johnny [O’Mara] for all the support. We’ve been working really hard and it’s good to leave on a good note. I can’t wait for Salt Lake.”