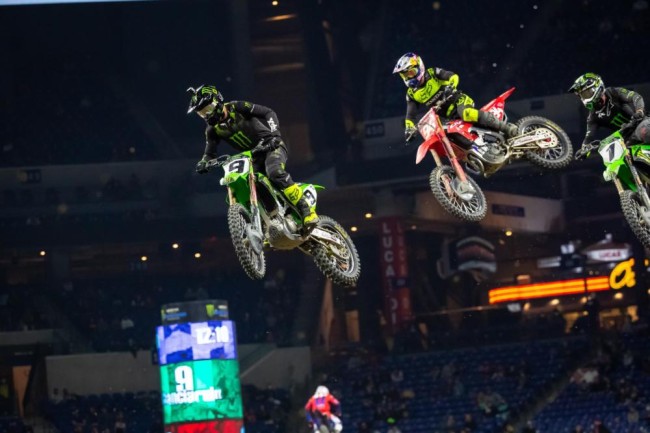 Ken Roczen: Although he was the championship leader, the pressure was building on Ken Roczen to get the first win of the season after losing a couple of good chances already this season. But even in Indy it didn’t come easy. Roczen was caught in a Kawasaki sandwich for half the main and tried to find a clean way around his mate, Adam Cianciarulo, before eventually having to pull somewhat of a block pass on AC that ultimately allowed Tomac to pass Cianciarulo in the same move.

Roczen of course, then jumped off the track while leading but from there his poise was superb. He let Tomac by, didn’t panic, then passed Tomac back immediately and held on under pressure to take the win to underline the fact he has been the best rider in the class so far this season.

“I didn’t really know what to expect because I changed everything up within me and my program. I shouldn’t say everything, but a lot,” said Roczen on his new attitude and program that is clearly paying dividends. “I just kind of wanted to see where I was at, and honestly enjoy the process and put the ego aside and just kind of rebuilt my whole, not image, but just rebuilt my career a little bit.”

Eli Tomac: Even though Tomac has already won a race this season, this may have been his most impressive performance. This was the first time he maybe had the raw speed to be at the front all day long, and even with a crash, he was still there in contention until the end. Again, Tomac didn’t panic after his mistake showing his maturity now he has won the title.

Eli seems to be riding himself into form and has already overcame the points deficit from a and round one – but he won’t want Roczen getting any more wins and momentum with Roczen upping the gap from6 to 9 over the defending champ.

“It was exciting,” said Tomac of enjoying the battle but not enjoying the results. “It sucks getting second, but exciting racing. It makes me want to come back and race more. It keeps what we do exciting and want to keep riding and racing, at least it does for me.

Dylan Ferrandis: This was Dylan Ferrandis’ best performance since his podium and that’s even with the mistake over the double – a jump that troubled him in the heat race as well.

Ferrandis was hounding his 250 title rival Cianciarulo for the podium until he mistake but was able to gather his composure and stay in touch with AC, Webb and Osborne to show he has the speed to be there week-in, week-out. After a bad H3 this was a big race for Ferrandis to underline to himself he belongs with the front runners.

Colt Nichols: Is Nichols now the favourite for the 250 title? this was a statement performance, even better given the fact teammate Craig said after a heat race win that Nichol’s weakness was the start of the race. Why Craig said that in public was bizarre and surely only motivated Nichols, and Nichols duly proved Craig totally wrong by getting the hotshot and pulling away from his title rival as Craig made his own error crashing while trying to hold Lawrence off in the last lap to ultimately get fifth. It couldn’t have went any better for Nichols, he rode great and his two title challengers didn’t perform when they needed too. This was a brilliant win to take the momentum in the championship