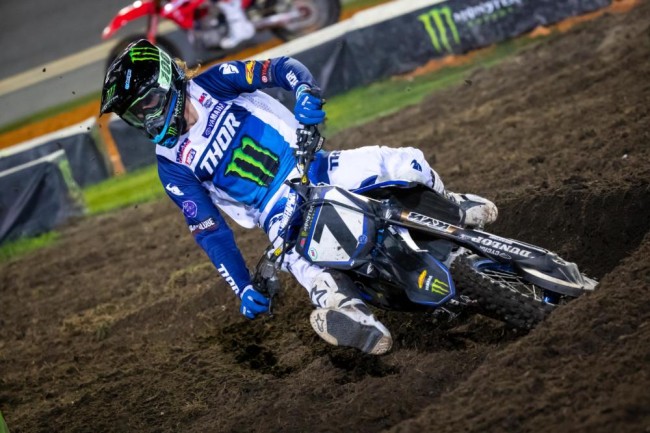 Aaron Plessinger: What a ride by Aaron Plessinger! This performance was reminiscent of his 250 days, that relaxed flow, carrying a lot of momentum and looking like he was just enjoying himself on the bike. Plessinger said he would be a different rider this year than his previous years on a 450 and, if I’m honest, I’m not sure I believed him. This is a big improvement and it’s great to see a former 250 champ showing his potential in the 450 division and adding another rider into the mix at the front. Plessinger got badly injured at Daytona too so to come back and get a podium here was a nice reward after his suffering, and you could tell by his emotional podium interview just how much it meant to him.

An ecstatic Plessinger said: This is definitely a monkey off my back, for sure. Going back to Daytona two years ago, I was lying in the emergency room with a shattered heel and not too sure what was going to happen after that, so to come here and rebound like I just did, it’s crazy. I’m speechless. I felt like I had more to give on the last couple of laps, but a podium is a podium and I’ll take what I can get. I feel like it’s going to come a little bit easier now.

Eli Tomac: Delivering under pressure is the sign of a champion and Eli Tomac delivered in style at Daytona to give himself a chance of defending his supercross championship. The American admitted himself that if Roczen and Webb had beaten him again he was out of the title hunt but with his back against the wall he pulled out a performance on a track he loves to cut the gap down to 24 points to Roczen and crucially, under one race.

Tomac also equaled Ricky Carmichael as having the most wins at Daytona – and there is a good chance he could get the outright record if he keeps racing, Tomac is brilliant at this track and he even admitted in the press conference that it suits his style. The question is can he repeat this on the more regular supercross tracks coming up?

Tomac said: “That was fun! I always enjoy riding at Daytona and it’s always been good to me. I was pretty strategic when picking my gate in the main because I was watching the other class and heat races and realized the inside might be my best shot at getting up front, which is exactly what I did. I fought for it too. Once I got out front, I wasn’t looking back. We’re still in this championship, so I’m not going down without a fight. I think we’ve found a good groove and I’m looking forward to our next stop in Dallas. I’m grateful for all the hard work and support from my entire Monster Energy Kawasaki team, I couldn’t have done this without them, especially five times!”

Cooper Webb: This man is ruthless! All of Cooper Webb’s biggest qualities came out in the main event at Daytona and he delivered a result his raw speed suggested he wasn’t capable of getting. Ken Roczen looked like he had the holeshot but Webb had other ideas. He saw his opportunity to get passed Roczen who is usually pretty deadly with a holeshot, ran him wide, and almost put Ken on the ground to ensure Roczen was back in the pack while Webb emerged from the maneuver in second!

The move worked to perfection and even though Roczen showed he was faster and caught back up to Webb, the American refused to give in. Then Webb, with Roczen approaching his rear wheel, somehow found some pace late in the race yet again and zapped Plessinger right at the end to take second and gain four points in the championship on a day when pure pace suggested Roczen should have extended his title lead!

Webb also gave a cold response to Roczen’s complaints about the move saying: “When we got back he was running his mouth he wasn’t too pumped but I’m not too sure why. I saw an opening and went for it. He’s focusing on himself this year and clearly he showed how much he is focusing on himself.”

Cameron McAdoo: Cameron McAdoo looked great all day and when it mattered and the pressure was on, McAdoo produced the goods. getting out front early McAdoo sped away to a memorable first race win at a track he rode on as an amateur and also took the points lead! McAdoo has always been fast but has a tendency t get a bit wild but he harnessed that speed and limited mistakes on a track that can be easy to make many. Will this be the start of McAdoo taking his riding to the next level and being a title contender?

McAdoo commented: “That was unreal. That is what we work so hard for. I can’t thank all of the guys at Monster Energy/Pro Circuit/Kawasaki enough for providing me all of the tools to get here. I have such a great team behind me. I have to give a special shout out to my mom because in 2016, she drove me all the way out here to Daytona in a van and now this is where we are. This is just the beginning and I look forward to continue working my butt off for more nights like this.”

Special mention too to Pierce Brown who came back in style after a knee injury to take a podium in his first race of the year and his first race on the Gas Gas. This guy is fast and someone who could really become a contender with a bit more experience. Gas Gas have chosen their riders well in the US for their debut season, a race win for Barcia and podiums for both of their 250 riders is a job well done.

Stylez Robertson also deserves credit. He rode fantastic at Daytona in only his second ever supercross to lead for a while and hold strong for second to show his potential. Rockstar Husqvarna have struggled a bit so far this season but Robertson has delivered potentially earlier than they expected and is bright light for the team who needed a morale boost. A shout out should also go to Coty Schock who rode fantastic on the FXR Chapparal Honda and was top five for the majority of the race until fatigue hit him and he ultimately got ninth. For a new team to see their bike and rider up front however will be a great boost for all involved, not least to the rider himself who has proven he has the speed when he gets away at the front.