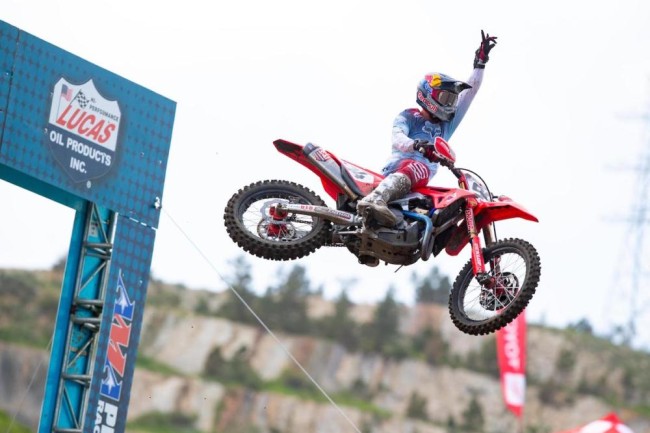 Ken Roczen: What a ride from Ken Roczen! Just ten days from feeling “disconnected” from motocross, Roczen has won three out of four motos and really looked back to his old self at Colorado. Blisteringly fast on the opening laps, Roczen got to the front quickly each time but the first moto was especially impressive after he got passed by Cianciarulo and Ferrandis only to pass them both back at the end, ending any doubt we or he had about his fitness especially considering they were riding at altitude and Roczen had suffered energy reduction previously in a similar scenario at the Salt Lake City supercross.

Cooper Webb with the Moto 2️⃣ holeshot 🚀 but Ken Roczen was not letting him run away with it 🏃 #ProMotocross pic.twitter.com/dfU4wVPIb1

“What a perfect day, I can’t believe it. It seems like I’m slowly starting to be my old self,” admitted Roczen who said testing had went well going into Colorado with the new Honda, making him feel even more comfortable – and it showed. It’s great to see Roczen back on form and in harmony with his machine, because when he rides this well he makes it look so easy and is a joy to watch.

Dylan Ferrandis: He didn’t win but Dylan Ferrandis underlined the fact he is well and truly a title contender in his rookie 450 season in US motocross. Ferrandis felt he should have won race one after passing Cianciarulo and Roczen but Roczen’s charge and no rear brake at the end of the race meant a frustrated Ferrandis ended up second but he still made his point as he and Roczen set a pace no-one else could match. In race two Ferrandis impressed again but in a different way by coming through a star-studded top ten to pass Barcia for second with two laps to go. Ferrandis is showing he can lead from the front and come from behind and looks very comfortable doing so, he looks to be in this championship for the long haul and has the speed under any circumstance.

Ferrandis said: “It’s the second race in a row that I’m on the podium, which is great. We rode great in the first moto, probably one of the best motos of my career, but unfortunately had a small issue that cost me the win. I had a bad start in Moto 2 and was mid-pack, but I gave everything I had and came back through the field and finished second again for second overall. We made some changes on the bike for the second moto, and it was really awesome. It was a good weekend. I’m just happy to be on the box again, and we’ll see if I can get the red plate back at the next race.”

Jett Lawrence: He didn’t have the pace in race one and was honest enough to admit it but he made amends in race two showing the determination and mental strength to go out and beat Justin Cooper straight up as Jeremy Martin crashed out ending his title aspirations. Right now win or lose, Lawrence is making good decisions. Minimizing the damage in motos he can’t win and maximizing the damage in the motos when the win is right there, his poise right now is impressive and he has made himself the guy to beat in the series.

Christian Craig: Yet again Christian Craig is showing how good he is on a 450 and doing it just a few weeks after breaking his leg is impressive. Yes, he had plenty of 450 testing time before the injury but he is right in the mix of a strong top ten already emphasizing his talent on a bike. Very like Arnaud Tonus in MXGP in terms of pure talent and style, Craig is capable of brilliant motos at times when everything is clicking but his consistency is impressive so far and he has already been rewarded with another contract at Star Yamaha to race 250 supercross and 450 outdoors again in 2022.

Craig commented: “Thunder Valley went pretty well for me. I always look forward to coming here, and I was able to set a good qualifying time and was confident heading into both motos. I had some heated battles with some other guys but was able to go 6-7 for seventh overall. It’s a step in the right direction, but I’m looking for a little more to try to get into that top five soon!”