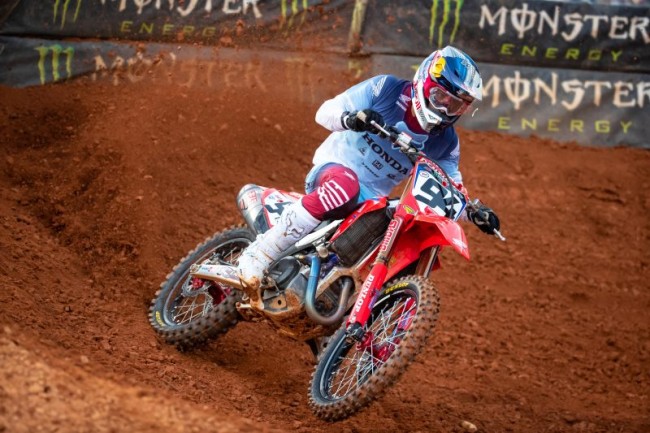 Ken Roczen: What a ride by Ken Roczen, this was the German at his brilliant best and no-one could touch him, this is what Roczen’s level really is when he is on and he discovered that form just in time to keep his championship aspirations alive.

Roczen survived a first lap pass attempt by Webb to disrupt his rhythm and from there he took off into his own realm, looking slower than the distant chasing pack but going faster than them all! Roczen said a change in attitude was key and if he can continue this for the last three turns and not let an aggressive Webb take away his flow.

“I wasn’t really myself and just struggling and struggling and couldn’t really do anything on the track,” said Roczen on his previous round. “This is not an excuse or whatever, it’s just what it is. Today things turned around and I just never lose hope. You see the points and everything fizzling away, but at some point, I’ve got to kind of look away from that because in the last few rounds I’ve had just a tough time in general. At some point you’ve got to just let go of that as well and kind of regroup. You can see things can turn around real quick. This is what we always say. Mostly I’m just trying to stay calm and not get over my head here, same with the win tonight. It came just at the right time and we all needed it.

“Honestly, between now and the next race I try to relax as much as possible. I don’t like to be in this on state all the time. I feel like it’s super draining. So, unless it’s race day or the night before—and even the night before, actually. As long as it’s not race day, I try to take it super easy, kind of enjoy what we did tonight and work on my body because the turnaround even now is pretty quick.”

Cameron McAdoo: Whether he wins the title or not Cameron McAdoo will always be remembered for this crash but even more importantly the heart and desire he showed to get back on the bike and then charge into turn one with a bent bike chasing the lead again and landing on the podium. McAdoo has made a big leap this year but his ability to re-group and ride through the pain was majorly impressive, this is a guy that wants it bad.

McAdoo said: “The crash was obviously crazy. I just re-saw it. I hit my leg really, really bad and I couldn’t move it. I was struggling to get my leg back moving. I was doing my best to get up. I was wanting to go back to my bike. I had the medics kind of tell me, “You probably shouldn’t.” I was like, “No. I want to go back.” Then they helped me down the jump. I was telling them stop. But I got back to my bike after they red flagged it and rode back and just told them I want to race, I’m okay. Obviously [Doctor] Bodnar came over and they checked me out thoroughly because they were concerned about my head. I passed all the tests. My bike was mangled, so the mechanics did the best they could. [Laughs] They were taping shrouds on, zip-tying stuff because everything fell apart. My bars were really rolled back and pretty bent, but I didn’t even really realize that so much until I came around the first turn. I don’t think I got the holeshot, but I was leading. It was tough. It was a tough race. About five minutes in when the adrenaline kind of wore off, I really realized how beat up I was. I’m pretty sore now.”

Jason Anderson: After yet another blistering qualifying performance everything that could go wrong did go wrong in the heat race, stalling at the start then getting landed on by Alex Ray and going to the LCQ. Anderson didn’t give up, ran Roczen’s times riding angry in the LCQ and coming through the pack t take a hard-earned but very well-deserved podium – but he he still searching for the start to get a good chance at scoring his first win since his 2018 supercross title – but he believes he is riding just as well!

“I think when I won my championship obviously the top five were very fast, especially in the beginning of that year. I think that year it kind of weeded out because I think Roczen got hurt, and then most of the rest of the other guys were still in there. Yesterday I felt like I was riding pretty freaking good. I think as far as a start, I think would definitely put me on the podium a lot more times this year than not. I think in Orlando I was riding really good, and a start would have put me on the podium. Dallas one of the rounds, I could have got on the podium. As far as speed goes, I think I’m as fast as I was back then.”