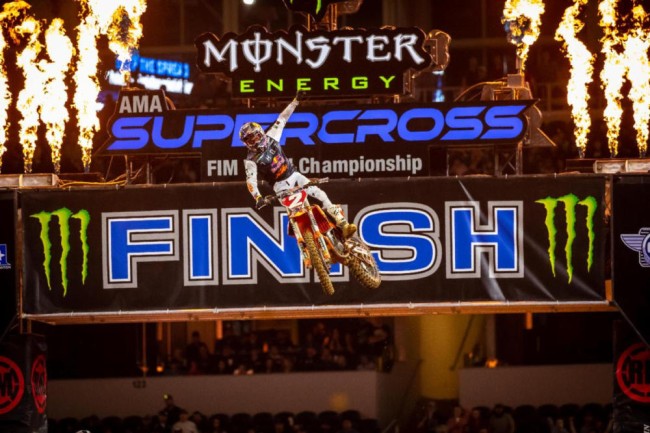 Cooper Webb: The championship leader should not have won this race! He was never the fastest all day, had a terrible heat that saw him get caught and passed by Roczen then put on the ground by Sexton to finish fifth. Somehow he still ended up with a gate beside heat race winner Roczen, but even then he wasn’t good out of the gate, but from there the mentality of Webb rose up and delivered a critical win.

Webb smartly went up the inside and came out second behind Roczen and although Roczen was faster initially, as was Tomac and Barcia behind him, Webb somehow kept his composure, kept Tomac at bay and then started to find his groove. From there the rest were in trouble.

Tomac made a mistake to let Webb get a gap and then Webb made the move on a faltering Roczen who, when it came to fighting for a title and putting everything on the line, just couldn’t deliver a viable aggressive challenge to Webb when he needed it. Webb made the move and pulled away to win a race he shouldn’t have won and extend his lead to 15 points with five rounds to go.

This was a masterclass in mental strength and delivering under pressure. Webb could easily had come outside the top three if he had ridden the main event like his heat race and the points could have been tight again. But when it mattered, Webb found the pace and delivered a potentially knock-out blow to Roczen who, despite being on-form all day, simply couldn’t out fight the fighter in hand-to-hand combat with a pivotal win on the line. This was a stubborn, determined Webb at his very best, he will never give in.

Webb commented: “I was just focusing on being consistent. I rode terrible in that heat race and didn’t like being put on the ground – that fired me up and got me going for the Main Event. To ride with Kenny that whole race and make a late charge was awesome, I felt really good out there. It’s incredible to get three here in Dallas, it’s unheard of for me. I’m pumped!”

Justin Barcia: Yes, he just missed the podium but this was a brilliant ride by Barcia. He verified his level as being on a par with the big three of Tomac, Webb and Roczen and while he got the short end of the podium stick, Barcia is without doubt having the best supercross season of his career in terms of consistency.

He was ready to pounce on the front three all night, and did make the move on Tomac for third until Eli forced his way back by, but Barcia is there and an extra per cent or two and he could be at the front of the four battling for the win and a title. That’s all that is missing and this is the closest he has ever been. For a first year 450 year and his first year on the Gas Gas, this has been a brilliant season underlined by his performance in Dallas.

“This was one of the hardest fourth-place finishes I’ve ever gotten,” said Barcia. “I charged so hard and was so close to the podium, it was a little bit frustrating. It was definitely one of the more intense races I’ve ever had and with such an aggressive track, the top four of us were just on top of each other the whole race trying as hard as we could. All-in-all, it was a great race but I definitely wanted to be on the box. We’re going to be working hard going into Atlanta, wanting more – to be on the podium, up front and getting wins.”

Justin Cooper: Down to third in the championship and no win since round one, the pressure on the pre-season favourite was intensified coming into Arlington 3 and the Star Racing Yamaha rider delivered what has been expected all season long.

Cooper finally turned his fastest qualifying times into a deserved race win, nailing a crucial holeshot to get away from the carnage of the pack and allow himself to show his speed with a clean track in front of him. McAdoo and Lawrence now know, if they didn’t already they can’t afford to let Cooper get the starts from here on out! Cooper is the fastest man in the class and he proved it at Arlington three, but with only six points between the top three Cooper is going to have to continue to deliver on the starts to make his life a lot easier.

Cooper said: “It was a great night. It kind of gave me flashbacks to round one in Orlando. I was first in every practice, won the heat race, and won the main. It was nice to get two holeshots tonight. We’ve been working to get back to that. It’s been a tough road this season with being on the ground and working my way from last in the main. I’ve had to fight for every position, so this was the kind of race I’ve been looking for. You can take it for granted when it comes so easy. I definitely showed myself what can happen at these last couple of races, so it was really good to have some clean air again, and it was nice to click off laps like I was at the practice track. I had a good flow and was just managing the gap the whole race. It feels good to be back on top and to leave with the red plate. I’m looking forward to the Atlanta rounds.”

Seth Hammaker: The rookie had a rare bad night at Arlington 2, and it would be easy to freak out trying to make up for it in the following round but Hammaker did no such thing. An ok start and some solid riding turned into a podium when Hunter Lawrence went fishing and caught himself in a net.

Hammaker’s composure is still impressive, he didn’t go crazy trying to catch the front three who already had a gap when he got to fourth but his pace is right there, and his even-keel mentality is proving to be a great asset this season and allowed him to get another podium in his first supercross season.

Hammaker said: “Today was pretty good overall. I think my goals have somewhat shifted now that we are halfway through our races, and for me being on the podium or at the very least a top-5 finish is all that I expect from myself. I am happy with my performance and glad we were able to get onto the podium tonight. At the beginning of the race, I actually made a mistake and the rider behind me smashed into the back of my bike and mangled it up pretty good, so I was just pumped to finish the way I did. Every time we line up it’s a learning experience for me, so I just want to keep learning and pushing to be up front running the pace of these guys like Cameron (McAdoo) and Justin (Cooper).”