Webb on the rivalry hype with Roczen – I feed off it! 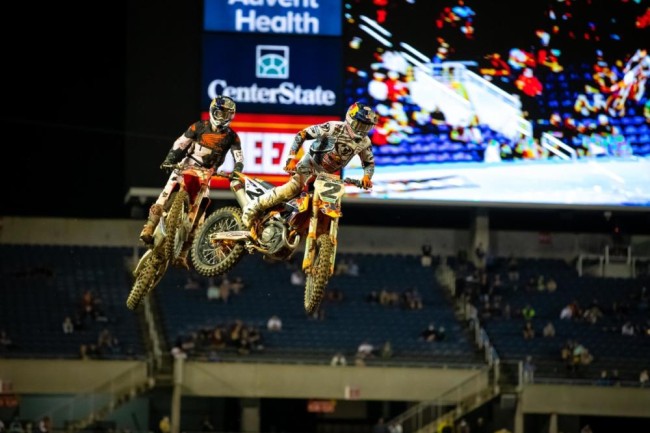 Cooper Webb says he feeds off the drama and hype that a night like Daytona brought when Roczen got riled at Webb’s pass.

Webb admitted to the media that the he enjoyed the chatter about the rivalry coming into Dallas, saying: “It gets me going. It was a good week for that. We made the most of it. It is what it is. Obviously in the times with Instagram and everything you’re able to see a bunch. It creates a good story, that’s for sure. I love it. I feed off of it. So, it was cool.”

When Webb was 16 points behind Roczen he had to win at Orlando 1 to stop Roczen’s three-race win streak and he produced when he had to. That was the race that, looking back, changed the whole season around for Webb and stopped Roczen running away with the series.

Now it is Roczen who has his back against the wall going into tonight’s race, behind Webb in the championship for the first time all season and no podium in three rounds, can he come out firing and take the momentum away from the gritty Red Bull KTM rider? It’s crunch time for Ken Roczen and you just know Cooper Webb is well aware of it and enjoying the role reversal!