Webb on his battle with Roczen: I charged hard at the end 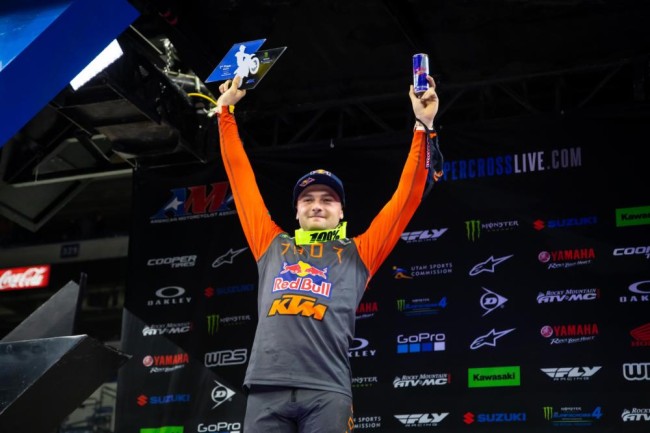 The Red Bull KTM Factory Racing Team returned to action in Indianapolis on Saturday with Round 6 of the 2021 AMA Supercross Championship and they capped off their stay in the Hoosier state with a double-podium finish in the 450SX class. It was Cooper Webb who led the charge with a statement performance and second overall, while teammate Marvin Musquin put himself in a favorable position late in the race to ultimately claim third.

Webb set the tone early on by powering his KTM 450 SX-F FACTORY EDITION into pole position for the first time this season. He kept his momentum rolling into 450SX Heat 2, where he grabbed a top-five start and charged his way up to third halfway through the race. With five laps to go, Webb picked up another spot when his teammate went down and he carried a second-place transfer into the Main Event.

Webb put himself in a favorable position off the start in the Main Event, where he sat in third just behind an intense battle for the lead. The 2019 450SX Champion patiently raced in third for the first 18 laps as he slowly began chipping away at the gap to second. Making his move into second on lap 19, Webb immediately looked ahead as he attempted to catch the leader of Ken Roczen. Webb was successful in catching Roczen in the final laps as he brought the pressure down to the last few turns before the finish. With a hard-fought effort, Webb ultimately finished less than one-second away from the win. Six rounds into the season, Webb continues to hold second overall in the 450SX Championship.

Webb: “It was a great day, a step in the right direction. I had good qualifying times and just came up short on the Main Event. It was a hard charge, so close but so far. Ken rode great and adjusted to the race as it went. I felt like I charged hard at the end and got close, but just not enough. I missed the rhythm with two to go and that kind of killed it for me but he rode a great race and beat me straight up, so we will go this week and try to get better. We made a huge step today with bike setup and comfort, so I feel like I am right there. It’s a long series so we will keep fighting every weekend and get back to that top spot soon.”

Musquin managed to turned things around for himself after experiencing a tough start to the night in the heat race. In 450SX Heat 2, Musquin powered his KTM 450 SX-F FACTORY EDITION into the lead on the opening lap, leading the first four laps of the race. He made a mistake in the whoops that led him off-track and into the tuff blocks, dropping him as far back as eighth around the midway point but he battled his way back to a sixth-place transfer.

In the Main Event, Musquin had a good jump off the line but he got shuffled back to eighth on the opening lap. He moved into seventh by the next lap, eventually working his way into the top-five. The French rider put himself into the right position late in the race as he capitalized on two riders going down in front of him with three laps to go. Assuming third, Musquin held strong in the final laps to round out the podium for the second time this season.

Musquin: “My goal tonight was to stay on two wheels and be patient. The last two or three rounds it’s been super frustrating for me, I’ve been very aggressive trying to make it happen in the first lap and ended up going down, so tonight I wanted to be patient. I was the fifth best guy tonight but it’s racing and the two guys in front of me went down so I got third. It definitely feels good to be on the podium, I’ll take it.”

Team rider Maximus Vohland sat out of Round 6 as he continues to recover from a dislocated hip sustained during a practice crash at the fourth round. The young rookie will continue to assess and evaluate his injury alongside his doctors.