Webb: It was a bit of a rough day for us 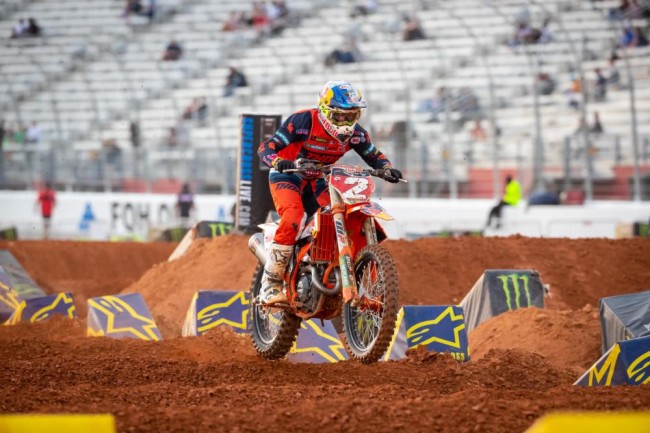 The Red Bull KTM Factory Racing Team salvaged a tough day of racing on Tuesday as teammates Cooper Webb and Marvin Musquin came away with sixth and seventh-place finishes, respectively, at Round 14 of the AMA Supercross Championship at Atlanta Motor Speedway. With three rounds remaining, Webb holds a 13-point lead in the 450SX Championship.

Webb got off to a third-place start in 450SX Heat 1 but he bumped into another rider early on and fell back to fourth. He fought hard in the final laps to ultimately secure a fourth-place finish in the heat. In the Main Event, Webb powered his KTM 450 SX-F FACTORY EDITION to a second-place start, settling into third early on. With a hard-charging group of riders up front, Webb battled inside the top-five early on but it wasn’t until the second half of the race that he began making progress. Pressuring Justin Barcia for fourth, Webb found himself on the ground while attempting to make the pass late in the race and he ultimately finished out in sixth.

Webb: “It was a bit of a rough day for us. In the Main Event, I got a great start and put myself where I needed to be but I didn’t execute. I finally turned it around, started riding well and hitting my marks a bit and then I caught Barcia and was trying to make a pass. We had some close calls and then over the wall, I hit his back tire and fell. It’s a bummer but we’ll come back for Atlanta 3 and work with the team and myself to hopefully be in the winner’s circle.”

Marvin Musquin had a strong start to the race day, launching his KTM 450 SX-F FACTORY EDITION into the lead right away in 450SX Heat 2. The French rider established a solid gap early on, leading all five laps to secure his second heat-race victory of the season. In the Main Event, Musquin began in fourth and battled intensely for a top-five position in the early laps. He found himself positioned just behind his teammate heading into the final laps and he ultimately finished one position behind Webb for seventh.

Musquin: “I had a really good start in the Main Event but unfortunately I was missing a little bit of intensity and I ended up getting passed by a couple guys, which killed my momentum. It was a tough race physically so I was trying to be consistent and just keep pushing until the checkered flag.”