Webb and Musquin on a disappointing day at High Point 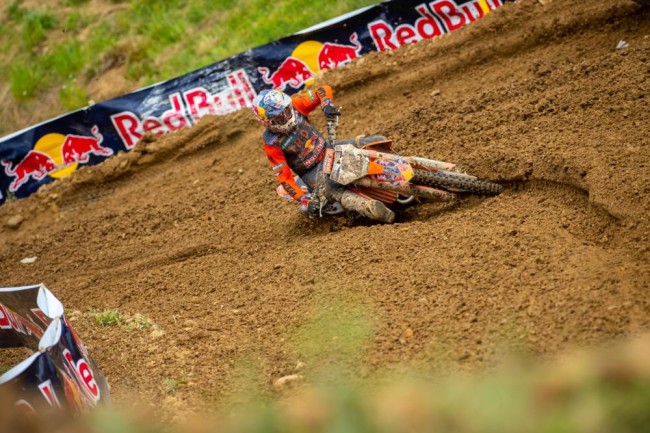 MT. MORRIS, Pa. – The Red Bull KTM Factory Racing Team returned to racing on Saturday with Round 3 of the 2021 AMA Pro Motocross Championship at High Point Raceway. In the 450MX class, teammates Marvin Musquin and Cooper Webb overcame their own challenges to finish inside the top-10 overall, while rookie 250MX riders Max Vohland and Kailub Russell took away some positives from a building year in the class. With thunderstorms in Saturday’s forecast, the weather managed to add a few more elements into the race conditions but Red Bull KTM riders came equipped for the battle.

In Moto 1, Musquin grabbed a sixth-place start and he engaged behind his teammate Webb on the opening lap. However, Musquin went down early on and dropped back to 10th, struggling to make up lost ground for the remainder of the race. Between motos, Musquin and the team went back to the drawing board and changed some settings on the bike heading into the second moto. Musquin didn’t get the start he was looking for in Moto 2 but he quickly charged through the field in the first five laps to put himself into eighth. He picked up another spot late in the race to ultimately finish seventh with a solid charge in the second moto. With 10-7 moto scores, Musquin secured eighth overall.

Musquin:“In the first moto, the start was decent but the riding was not good enough and the feeling was not good enough so we decided to go back to some old settings on the shock and it shows, it was definitely better in the second moto. I didn’t get a good start but I was able to fight back, attack and race hard to come back to seventh place, so that was a lot better. Overall, I’m obviously not happy because we’ve been working hard and it didn’t pay off for this weekend, so we need to keep going.”

For Webb, qualifying was a step in the right direction coming away with a seventh-place position for the start of racing. He got off to a strong top-five start in Moto 1 and he maintained a solid position up front aboard his KTM 450 SX-F FACTORY EDITION. Shuffling back mid-way through the race, Webb finished seventh in the first moto. In Moto 2, he got tangled off the start and dropped back outside the top-10 on the opening lap. He fought hard to make up lost ground but a series of crashes throughout the race didn’t help his charge as he ultimately finished 11th in the race and 10th overall.

Webb:“It was a bit of a struggle today. I felt like I put up a good fight in the first moto and ended up seventh. In the second moto, I got tangled on the start and I ended up crashing three times coming through the pack, so that was pretty unfortunate. Now we’ve got a weekend off and all we can do is try to improve.”

The Red Bull KTM Factory Racing Team fielded two 250MX riders for the first time in 2021 as rookie Max Vohland was joined by eight-time GNCC National Champion Kailub Russell aboard the KTM 250 SX-F. Vohland experienced some unfortunate luck in the first moto when a crash after the start turned into a bigger situation after finding himself stuck under the bike in the second turn. After getting unstuck, Vohland set out from dead last and charged his way up to salvage 18th in the first moto. In Moto 2, he got off to an eighth-place start and worked his way into seventh early on. A couple mistakes later in the race dropped him back a couple positions, where he ultimately finished ninth in the race and 13th overall on the day.

Vohland:“It was a little bit of a tough day today. Practice didn’t quite go the way I wanted it to and we did a little bit of a bike change before the first moto. I ended up going down and getting stuck under the bike so it took a while to get up and I did my best to charge back and score some points. We did a little more of a bike change in Moto 2 and that helped a lot. I got a good start but I made a few mistakes and ended up getting pushed back to ninth. I’m looking forward to the next round, I’ve got some things to work on myself and it’s going to be good.”

After announcing his retirement from professional GNCC Racing this season, talented offroad racer Kailub Russell made plans to race the 2021 MX series with Red Bull KTM but a practice crash caused him to miss the first two rounds of the series. With six weeks of recovery time, Russell lined up for Round 3 and powered his way through the somewhat unfamiliar terrain, proving himself competitive amongst the top 250MX riders in the nation following a respectable 15th place finish in Moto 1. In the second moto, Russell got caught up in a first-turn pileup and found himself outside the top-20 on the opening lap. He fought his way through to finish 21st in the second moto and 21st overall on the day.

Kailub Russell: “I felt like I had more to offer today but it’s tough with the first-turn crash and being that far back when you’re not used to being around that many people and hitting jumps and ruts and stuff. I was happy with how I rode in the first moto but I have some things to improve on and work on the next couple of weeks. I want to have some fun and do the best I can out there and I felt like today was a good day for that. I’d like to be better and more in the race but all in good time.”

The AMA Pro Motocross Championship heads into another weekend off before returning to racing on Saturday, July 3 for the Round 4 RedBud National in Buchanan, Michigan.