Video: Team HRC fighting back in 2022 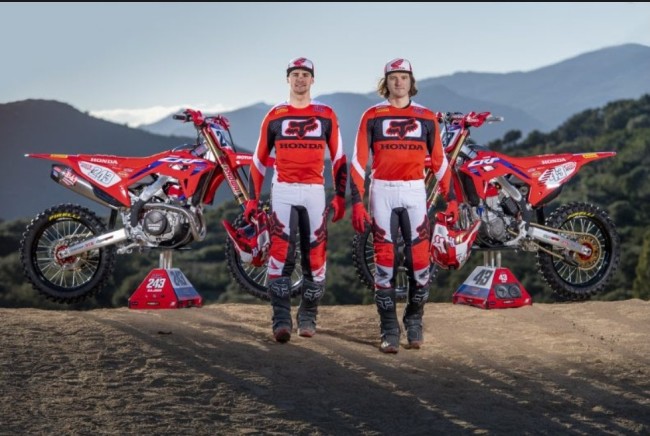 Tim Gajser and Mitch Evans will be under the Team HRC awning in 2022 as they both look to rebound from differing 2021 campaigns, and put their Honda CRF450R’s at the front of this highly competitive MXGP class.

Last year’s championship was filled with a lot of good moments for Team HRC, with four-time world-champion Gajser winning four rounds after some really impressive riding, including an incredible one-one performance at the opening round in Russia. However, ultimately, he came up just short in his quest to become a five-time champion, and it is that outcome that he is looking to set right when he lines up at Matterley Basin and beyond, for what should be another intense title-battle.

For teammate Evans, 2021 was the most difficult of his young career as he was forced to watch from the sidelines whilst recovering from the wrist injury he sustained at the MXGP of Spain in 2020. Missing an entire season is never positive, but the Australian has kept a strong focused mindset and is hoping to bounce-back this year and remind everyone of the rider who scored a third-place finish in his first ever MXGP moto. He knows it won’t be easy and isn’t putting pressure on himself to get those sorts of results straight-away but his belief in his ability has never wavered and it should only be a matter of time before the #43 is challenging at the very front of the field.

First up for both riders are the preseason Italian International races, before they head to Great Britain and the amazing Matterley Basin track on the weekend of February 20th. From then on, it’s a steady stream of racing, on some of the best tracks around the world, with hopeful returns to some of the overseas destinations that have been unavailable these past two seasons. Whatever happens this year with the calendar, both Honda riders are ready to bounce back and give their best in the 2022 World Motocross Championship.

Tim Gajser: “I feel really good coming into this 2022 season. Obviously last year didn’t end the way I wanted, as I finished third in the championship, which is still good, but it isn’t what I aim for. I did have a lot of good moments and those are the things I am focusing on and building upon in this off-season. We haven’t had a lot of time to switch-off and relax so that has been difficult but I am feeling fit and healthy and ready to fight for the championship. I will race the Italian races to give me some warm-up gate drops but I know the real racing starts at Matterley Basin in under one month’s time. There are a lot of familiar tracks on the calendar and I am confident that I can maintain a high level of performance and put the Honda CRF450R on the podium throughout the season. Hopefully we can get into a regular routine and the schedule stays the same, and that the fans can come out and support us at all the rounds as that makes such a big difference.“

Mitch Evans: “It’s been a really tough 15 months for me, not being able to race and not being able to ride for such a long time. It’s been hard, both physically and mentally to try and stay positive and to keep the motivation high to come back to what is an extremely high level of motocross in the MXGP class now. However, I am feeling better and better every day now and my fitness and strength is ahead of the schedule I’d set out for myself. I know that it won’t be easy to race these guys right away because they are going so fast, but I’m not putting pressure on myself and I truly believe I can get back to that level. You never lose your ability to ride, so it’s just a case of getting my left-side strong enough and that is happening day by day. I’m really thankful to have had the support of Team HRC throughout this period and I’m really looking forward to paying that back by putting in the results on the track.”

Marcus Pereira de Freitas: “It is great to have both Tim and Mitch under the awning this year, and they are both working really hard to be ready again for the new season. The break was very short from the end of the 2021 campaign so it has been a very busy period and I must thank everyone in Team HRC for continuing to work hard to make sure we are all set for the first gate drop. Tim always does the work necessary, both with bike testing and his own physical training so I always trust him to do exactly what he needs to do. Mitch has been back in Europe for a little bit now and all the reports have been positive and now we get to test with him before the first MXGP and that will give us an idea of where he is. We know it won’t be easy as the level has risen since he last raced but he is very determined and we will make sure he has everything he needs to get back to top of the class. It sounds like we are going back to a two-day format, which I think is good for the sport so we need to be ready for that, but overall, I think Team HRC is in a strong position for 2022.“