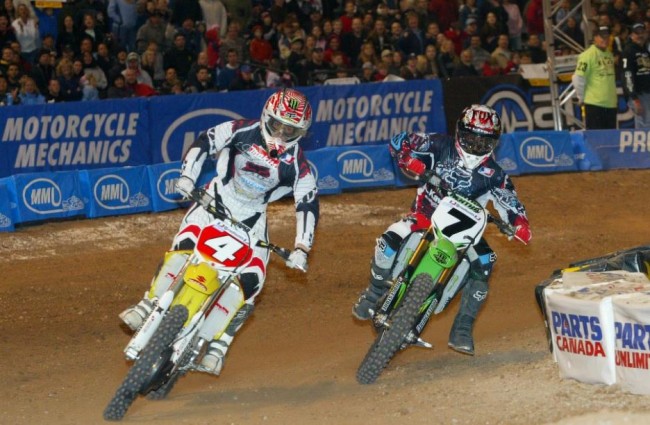 James Stewart has got Ricky Carmichael on his podcast to discuss their rivalry during the mid 2000s!

Get a flavour of the conversation below…

Stewart: “When I looked at Chad he was quick in the beginning (of the races), when I looked at you I felt like, until you obviously continued to get better and better, I just felt like I could get away from you before the fitness would come in. And then that changed. I respect you for that because there was something that changed when I used to watch you with Chad until we started getting..,especially 06 and 07, you got faster. I was curious, did that start in 05?

Ricky: “You changed the game in so many ways. But that’s what I had to do to have a chance (improve early race speed) because I was like, ‘ he just fires off so much faster.’ I didn’t want to change that from 2005 to 2006 because it was my last year racing for a championship. I didn’t want to change anything, I’ll take my chances, I think I can be better in a longer series. And then 06 to 07 when I could play, I was like this is what I’m doing, because you would go so fast those first ten laps, and my arms would just blow up! I’m like. ‘I can run the pace but I just can’t run the pace for that long, so maybe I won’t warm up too much, I just need to go out and fire off,’ and that’s what I started doing. I had to get faster, otherwise you were going to absolutely crush me. I don’t think Chad was willing to make that sacrifice.”

“You aren’t giving yourself enough credit to the gains you made from 05 to 06. I knew at the end of 06, I didn’t want any of it in 2007, straight up. When I raced 6 races, I won 3, but i got lucky because you and Chad got together at St. Louis, that should have only been two. I could only win on a technicality for so long, trust me, you were coming. You had figured it out, your strategy was becoming much better, you were older, you were getting experience, you were growing.”

Watch the full discussion with two of the greatest ever below and learn how they created strategies to beat each other – a lot of thought went into those battles!