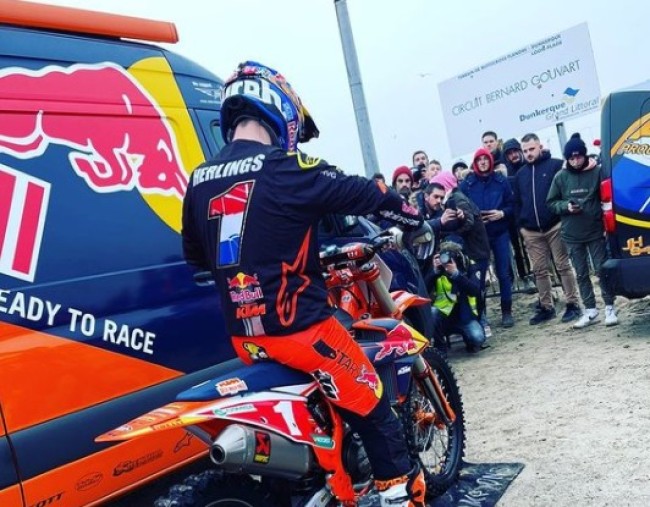 Jeffrey Herlings crash he had out in Spain has been caught on camera and it’s a nasty one to say the least. It looks like the MXGP World Champion was doing his annual Factory KTM photoshoot but came up short on a jump – perhaps a stone was in his take off rut to make things even more unlucky as it’s quite a bizarre crash.

We now have official word from KTM on the crash:

The reigning MXGP World Champion, who claimed victory in the opening round of the Spanish national championship the day beforehand as part of his warm-up preparations for the forthcoming 2022 MXGP season, was unseated on a small and routine jump section of the former Grand Prix site RedSand MX complex near Castellon.

Herlings, 27, hit his left heel in the resulting crash. The Dutchman organised travel back to his home in Belgium and after consultation, underwent surgery performed by Dr Stefaan Verfaillie (who worked on his previous ailment in 2019) to insert several screws and a supporting plate to fix the damage.

Jeffrey, his medical advisers and the Red Bull KTM team will now oversee his recovery for a return to action when fully fit and ready to race.

Jeffrey Herlings: “We’re paying the price for a ‘nothing’ crash. I think I might have hit a small stone on the take-off and that put me over the bars. The impact was pretty big on my left foot and we needed to get it fixed the best we could. Big thanks to the medical staff for looking after me and getting my foot repaired, again! Also to the whole Red Bull KTM team: we’d worked hard for this 2022 season and the goal now is to be back and winning as soon as we can.”

Joel Smets, Red Bull KTM Factory Racing Team Manager: “Of course this is very disappointing for Jeffrey, the team and the championship. Trying to look at the positive side the injury is not as complicated as his foot problem in 2019. The operation took some time but everything went well and we hope Jeffrey can be out of a cast in less than two weeks and can even start some light training such as swimming and some other activities. Then we’ll have to see how he recovers to plan his GP return.”

Podcast! Jonathan McCready and Andy McKinstry look back at Anaheim two, another unfortunate foot injury for Jeffrey Herlings and the first pre-season internationals in Europe ahead of the world championship beginning in three weeks. Listen on iTunes here or get it on Spotify or YouTube below: