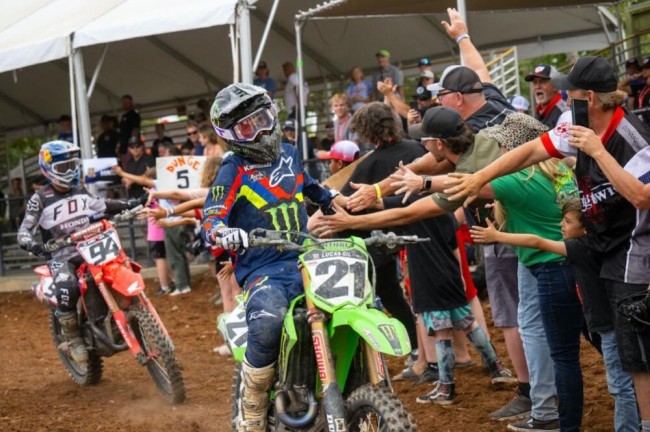 There was some great racing at Hangtown – here are the highlights:

Jason Anderson, Monster Energy Kawasaki
“I had to work to get up there (in the second moto). Honestly, I thought I only got on the podium, but after I pulled off the track I realized it was a win. It was 12 years too long, but we finally got it done. I’m damn happy. Let’s keep it going.”

Chase Sexton, Team Honda HRC
“I just couldn’t get away from them today. I led a lot of laps, but didn’t get the win. Overall, I’m happy with how I’m riding. To show some grit was good for me. I still have the red plate and just need to keep digging.”

Eli Tomac, Monster Energy Star Yamaha Racing
“That was some fun racing right there. It felt good. Chase (Sexton) and I had a good battle. I found some good lines and got into a good flow. I’m happy to get on the podium for Yamaha and looking forward to next week.”

Jett Lawrence, Team Honda HRC
“It’s been a rough one today. Being sick made it really difficult on me and I even threw up before the second moto. In that second moto I was just pushing all the way through. It was a difficult day but I’m just pumped to be up here (on the podium). Hopefully we can move on from this and continue with the season.”

Justin Cooper, Monster Energy Star Yamaha Racing
“From 12th overall last weekend to being on the box (podium) in both motos today is just what I wanted to do. It was important to start up front and battle with the leaders. That’s the kind of turnaround we needed. We’re back in the mix now and we’re ready to start fighting for these wins.”

Hunter Lawrence, Team Honda HRC
“Jett (Lawrence) and I have both been a bit under the weather so it’s been tough, but not a bad day for a bad day. My starts have been terrible, but we’ll work on them and come back swinging next weekend. I’m happy with my riding and we’ll try to give Jett a challenge.”