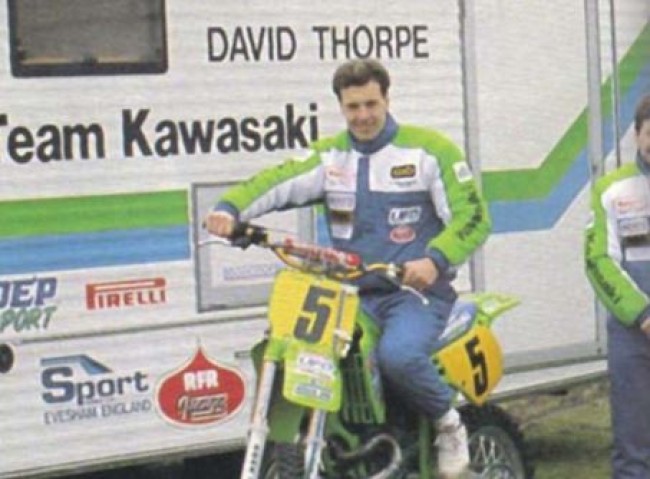 It wasn’t the best of times for Dave Thorpe when he switched to Kawasaki in 1990 following his third world title for Honda in 89, but he still had some success! In fact, if it wasn’t for no points at the final round in 1990, Thorpe would still have finished third in the world but ultimately finished fifth just 14 points off a bronze medal.

Injury then scuppered Thorpe’s 1991 season as he missed the first two rounds but he still finished seventh just a point behind sixth place Jacky Martens and less than 40 behind third placed Dirk Geukens.

Speaking of his Kawasaki years, Thorpe told us: “The Kwacker was a development bike and the bike I tested on you would be quite right to say it was a bit of mish mash! (Nicoll’s mechanic bolted different bits together for Thorpe to test on!). But when we went to Japan, the bike we tested was completely different. And I think, whilst I won Grand Prix in 1990, I was never a contender for the championship. The bike was a development bike and in hindsight I should have stayed where I was but hindsight is a wonderful thing.

“I got myself together pretty good for 1991 believe it or not. I felt I was riding really good and then the conrod came out of the side of the engine on an uphill triple at Payerne, Switzerland. That dislocated my shoulder and that was pretty much the end then, it was a very difficult injury to try and ride with and the results just weren’t there. As with all athletes, you keep pushing and when the results don’t come your confidence drops and at that level, once your confidence drops, you are not really in the game.

“It was disappointing for me because I felt I was probably putting a little bit more effort in certainly on the physical front and just not achieving the results. But I think things through quite logically and whatever made me special on the Honda had slowly evaporated on the Kwacker, it’s just the way it rolls.”

See one of the bright spots for Thorpe on green with a great performance at the German GP in 1991: